It’s been anything but business as usual for the Mornington Peninsula, one of Australia’s blue-chip coastal regions, an hour southeast of Melbourne.

Against the backdrop of the global pandemic, rising unemployment, strict social distancing and economic fears, the prestige coastal community has offered homeowners a refuge and demand has seen it rise to become one of the country’s best performing areas.

Once the domain of wealthy second-home owners who decamped to their holiday properties over summer, it’s become a permanent hotspot with buyers across all price brackets trying to get a foothold in the area for the best part of six months.

Offering an appealing mix of diverse housing and an aspirational coastal lifestyle, the Mornington Peninsula is a comfortable commute to Melbourne’s Central Business District and has immediate access to restaurants, cafes, wineries and recreational activities.

“Every month since March 2020 has been a record month for us in terms of total sales value and volume,” he said.

There was no let-up in interest over Christmas and New Year’s holidays after a busier than expected trading period in the winter reduced stock levels ahead of summer.

Among several notable transactions in December, was the $5.5 million (US$4.26 million) sale of a two-bedroom house on 461 square meters of beachfront land on Mentor Road on Blanarring Beach and a home on Bowen Road in Sorrento that sold for more than A$4.5 million within 24 hours of hitting the market.

An architect-designed house on MacGregor Avenue in Portsea, which has a price guide of A$6.8 million to A$7.3 million, is typical of what discerning buyers are looking for in a luxury Peninsula property Mr. Curtain said.

Designed by Guildford Bell with five bedrooms and five bathrooms, it occupies a private 3,000-square-meter block in easy walking distance of the beach. 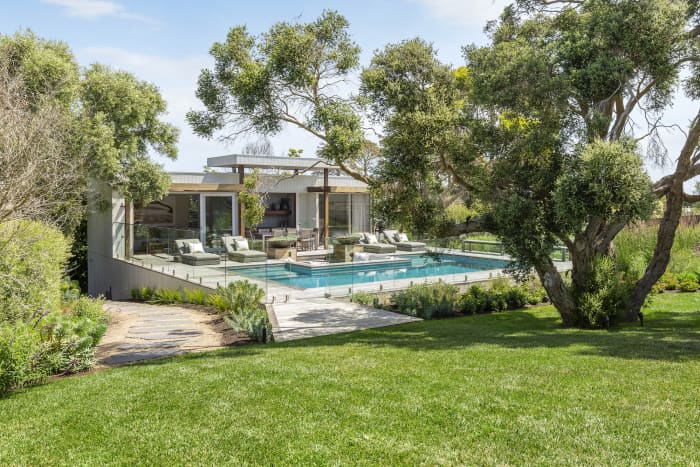 This architect-designed private estate is a walk from the beach and expected to sell for more than A$6.8 million.

“High buyer demand and a lack of stock creates competition and ultimately strong sales results. This year we have seen very quick and sharp increases in property prices never seen before,” Mr Curtain said of the activity.

“The majority of buyers are either upgrading existing homes or making a longer-term commitment to buying on the peninsula. Without question the restrictions on travel has changed lifestyle options for many buyers,” he said.

Australia implemented international and national border control measures and physical distancing rules to reduce the spread of Covid-19 from March 2020.

Movement restrictions and social distancing requirements resulted in a ban on all in-person property inspections and auctions across the country.

Although Australia flattened the curve and lockdown restrictions eased in late May, a cluster of cases led to a second wave of infections in Victoria. A “state of disaster” was declared and Victoria faced severe restrictions including a nightly curfew, mandatory face coverings in public and the closure of schools and businesses between August and October. The Victorian Department for Health and Human Services reports more than four million Victorians have been tested for the virus since March with the state recording several days of zero new cases in early January.

Kay & Burton Portsea managing director Liz Jensen, who has sold property on the Mornington Peninsula for 35 years, said she was shocked at the demand that followed the lift in restrictions in October.

She said while the area was usually always busy in spring, she estimated inquiry levels increased three-fold once Victorians were allowed to move freely around their state again.

The momentum of spring on the Mornington Peninsula has carried through to summer according to agents. More than 32,000 people have taken a shine to a listing for a home on Wild Coast Road in Portsea, making it one of Australia’s most viewed properties in January, according to online sales portal, realestate.com.au.

This boutique hotel-style luxury home has attracted more than 30,000 views to its online listing. Kay and Burton Peninsula

Several groups have conducted private inspections since it was listed the week prior to Christmas and an offer is imminent, said Ms Jensen, who is the listing agent for the property.

With a price guide of $8.8 million to $9.75 million, the eight-bedroom luxury home is embedded among the sand dunes and is not your “usual beach house,” Ms Jensen said.

Its indulgent resort-like feel has been designed to cater for large family gatherings or to be shared with groups of friends.

“There’s not much in these areas, it’s a thin market, so there’s always a level of buyers for properties of this calibre,” she said.

“Buyers are accelerating their plans, they’re not old enough to retire, but they’re choosing homes down here to live in permanently. We have people buying everything in every price bracket from $1.5 million to $10 million and everything in between.”

Buyers, she said, are looking with intention and showing a new appreciation for the established area.

“Over the last Covid year and going into this one, I find people to be very clear in their mind that they want to live a certain lifestyle that is more relaxing and less stressful,” she said.

“They want to enjoy themselves more and be able to share that with their family and friends. That works well down here,” she added.

The trend hasn’t been lost on REA chief economist Nerida Conisbee, who picked the Mornington Peninsula as one of her top 2021 regional performers, based on its stellar results in 2020.

“Mainly because the region has seen the biggest jump in views per listing in Australia this year,” she said.

“The most popular suburb with house hunters is Blairgowrie where views per listing have more than doubled in 2020. It suggests buyer demand is accelerating while prices in Portsea jumped 20% last year to hit almost $2.4 million.”

However, Ms Conisbee expects Australia’s best-performing regional areas to be those that are closest to a capital city as movement returns and restrictions ease.

The Australian Government’s $257 billion in direct economic stimulus to cushion the blow of the pandemic and the country’s record-low interest rate have helped support the property market but it’s the explosion of people shifting from capital cities that has had a dramatic impact on regional markets.

The spike in city-dwellers fleeing urban environments for a coast or country lifestyle meant regional house prices grew faster than metropolitan values for the first time in nearly 15 years.

It’s a movement not lost on the Mornington Peninsula, which appears to have its short-term future all but assured with January set to be another record month, according to Mr Curtain at Sotheby’s.

“The forecast for 2021, especially the first half, is likely to stay very strong as a lack of stock with more people using their homes than ever continues and cheap money provides further confidence for buyers,” he said. “But it’s a crazy world, so I’ll leave predicting the latter half of the year to those with a crystal ball.”