Europe Is Still In The Throes Of Covid-19, But Its Stocks Are Rallying

Europe Is Still In The Throes Of Covid-19, But Its Stocks Are Rallying 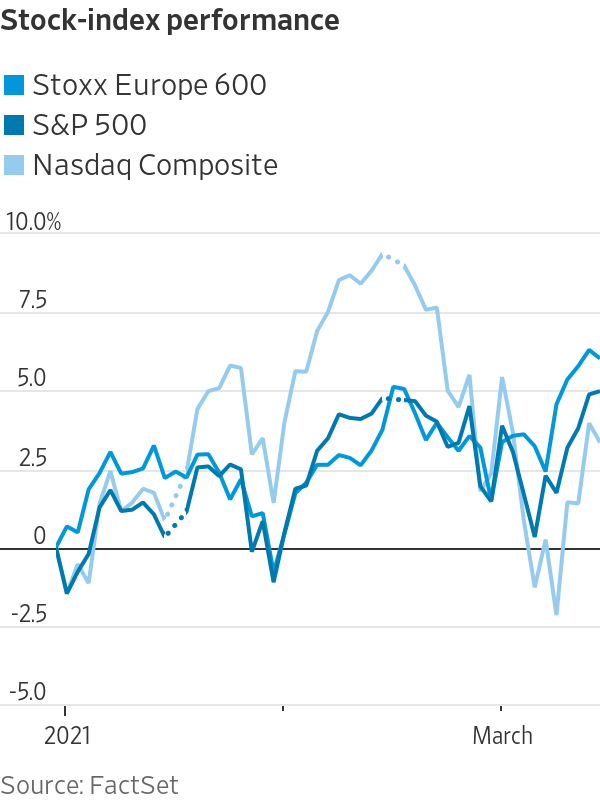 European stocks have been on the rise as international investors reposition their portfolios for the global economy to return to normal—a trade that hinges on smooth reopenings in the region.

The pan-continental Stoxx Europe 600 index has gained 4.5% so far this month, pulling ahead of major U.S. gauges, and on Friday hovered close to its highest point in more than a year. The S&P 500 has added 3.5% in the same period and the Russell 2000, an index of small-cap U.S. companies, has increased 6.9%. The Nasdaq Composite has gained 1% so far this month.

Analysts say this is due to a rotation from growth to value stocks: Investors have been snapping up shares of companies hit hard by the pandemic and selling those that benefited from stay-at-home orders. Europe is emerging as a beneficiary of this trade, which banks on a strong economic rebound.

Value stocks are thought to be trading below what they are currently worth. They are typically in established industries and pay dividends, and include banks, energy and industrial companies, which are also more sensitive to the economic cycle. Growth companies are younger and perceived to be innovative, with potential to do well in the future, such as technology.

But delays to the European Union’s procurement of vaccines is likely to result in its member states keeping social-distancing and travel restrictions in place for longer than countries that are inoculating their populations faster, such as the U.S. and Israel. This might mean that Europe’s economic rebound is slower and weaker. Italy reimposed stricter curbs in several regions last week and plans to lock down nationally over Easter.

“We are finding a little bit more opportunity outside of the U.S. [Value stocks] look cheaper and more undervalued overseas,” said Brent Fredberg, director of investments at Brandes Investment Partners in San Diego. “Now you’ve still got a long way to go in many of these companies, even though they’ve rallied hard.”

A key reason for Europe’s recent strong stock-market performance is the composition of indexes. The Stoxx Europe 600 is more heavily weighted toward industries that are considered to be value, such as financials at 17%, industrials at 16% and energy companies at 5%. Its weighting for technology and communications is 10%, compared with 37% for the S&P 500.

Amundi’s Mr Elmgreen has bought shares of European auto makers and companies that produce construction materials recently, and said he is “significantly underweight” U.S. tech, meaning he owns less than the benchmark he tracks.

Another driver of Europe’s performance is the bond market. The sense of optimism about economic growth has also driven fund managers to dump safe-haven assets such as sovereign debt, causing yields to rise and prices to drop. Government bond yields are used as a reference for the cost of debt in the broader market, including loans to companies. That rise in yields implies higher financing costs, benefiting lenders.

European banks have been among the best performers so far this year. Investors have been expecting the recent rise in yields to improve their net interest income, a key source of revenue. French bank Natixis SA has surged 47%, while Amsterdam-based ING Groep NV and Spain’s Banco de Sabadell SA have both risen 32%.

The Vanguard FTSE Europe ETF is up 5.6% for the year and the iShares Europe ETF has also risen 5.5%. Another iShares ETF that invests in European financial firms has climbed 12%.

But whether these gains are justifiable is still a question, according to Simon Webber, a portfolio manager at Schroders with a focus on global equities. “Travel has fundamentally changed, people are used to working productively, meeting and supporting customers remotely,” he said. Aviation stocks in particular “will be heavily scrutinized,” he added.

He has increased his holdings of European banks, but is also looking at buying more growth stocks such as electric-vehicle companies.