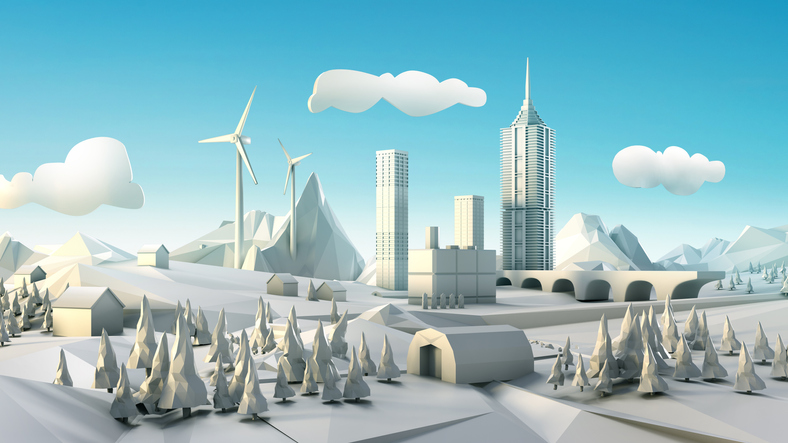 Can a multibillion-dollar project in the Saudi desert jump-start the demand for green hydrogen, an elusive energy source that could help eliminate carbon emissions from vehicles, power plants and heavy industry?

The allure of hydrogen is undeniable. Unlike oil and natural gas, it doesn’t emit carbon dioxide and other greenhouse gases when burned. It’s more easily stored than electricity generated by wind turbines and solar farms, and it can be transported by ship or pipeline. Green hydrogen, which is produced using renewable energy sources, is especially attractive as a fuel. It’s made from water rather than methane or other hydrocarbons.

But those who foresee a green hydrogen future face a quandary: The high cost of producing the odourless, colourless, flammable gas can be mitigated only by large-scale projects, which in turn make economic sense only if there is a widespread market for green hydrogen. That doesn’t yet exist.

In Neom, a planned megacity of the future now taking shape in northwestern Saudi Arabia, the investors behind the green hydrogen project think they can deliver the chicken and the egg.

The initiative—a joint venture of Neom, U.S. chemical company Air Products & Chemicals Inc., and Saudi Arabia’s ACWA Power—will invest $5 billion to build what will be the world’s largest green hydrogen production facility. Another $2 billion will be invested in distribution infrastructure in consumer markets around the world, primarily to fuel industrial vehicles and public buses.

Plans call for the sprawling facility, which isn’t yet under construction, to produce 650 tons of green hydrogen a day starting in 2025. The facility’s output will dwarf that of a green hydrogen plant in Québec that produces about nine tons a day, making it the largest such facility in the world. The Neom project exemplifies the Kingdom’s ambitious plan to diversify away from oil and natural gas and showcase Neom as a global hub for technology and green energy.

One of Neom’s main advantages in what could become a global race to develop green hydrogen is that the city’s location along the Red Sea possesses world-class solar and wind power, according to Peter Terium, head of Neom’s energy sector. Solar will power the plant during the day, wind at night, he says.

It isn’t easy to find a site with strong enough wind and sun, as well as proximity to a port, Mr. Terium says. “Otherwise, we wouldn’t be the first to announce an investment of this size,” he says.

Other countries are following suit. Australia, for example, has expedited the approval of a $36 billion project in the Outback in the western part of the country that will generate 26,000 megawatts of renewable electricity to be used to power the green hydrogen production.

Most hydrogen made for commercial use is so-called grey hydrogen, which is produced by splitting the hydrocarbon molecules in coal or natural gas. This process emits carbon. Green hydrogen, on the other hand, emits no carbon because it relies upon a process called electrolysis, in which electricity is used to strip hydrogen atoms from water molecules.

Air Products is the world’s largest producer of hydrogen, most of which now is derived from fossil fuels. But through its involvement with Neom, the Allentown, Pa.-based corporation is betting big that many countries will pay a premium for green hydrogen to meet carbon reduction targets, according to chief executive Seifi Ghasemi.

The Neom project aims to produce enough hydrogen to fuel about 20,000 buses a day. But rather than being piped or shipped to end users as gaseous or liquid hydrogen, the hydrogen will first be converted into ammonia, which is denser and therefore more economical to ship. After being sent by boat to Asia, the U.S. and Europe, the ammonia will be converted back into hydrogen before being sent to filling stations built by Air Products.

“The only thing [the customer] has to do is buy fuel cell vehicles to use the hydrogen,” Mr. Ghasemi says. “Hydrogen will become, 30 years from now, like oil is today.”

It’s a bold prediction that would require significant changes to the way we use fuel and electric power. Not all experts see that happening because of the sheer cost and magnitude of redesigning energy infrastructure around the world. That would require changing everything from vehicles to household applications.

Such a world would look markedly different. Filling stations would dispense hydrogen instead of gasoline. Hydrogen could be piped into homes to feed heaters and gas stoves. And unlike wind or solar, it could provide a steady supply of electricity for large power users, such as data centres and manufacturing hubs, when the wind doesn’t blow and the sun doesn’t shine.

If it can be scaled, green hydrogen could also help solve several big challenges in a lower-carbon economy: powering heavy-duty trucks and ships without reliance on giant batteries, providing round-the-clock electricity to supplement intermittent supplies from wind and solar and decarbonizing heavy industrial processes including steel and concrete manufacturing.

Among energy nerds, hydrogen has long been the butt of a joke: It’s the fuel of the future, and probably always will be. The most abundant element in the universe, hydrogen has seen rounds of hype before, most recently in the early 2000s, when it was promoted as a transportation fuel amid fears about declining reserves of fossil fuels.

Some investors remain deeply sceptical of hydrogen, citing its high cost and the inevitable challenges of building infrastructure necessary to deploy it at scale. Kerrisdale Capital, a New York-based investment firm, is shorting shares in a fuel-cell maker whose share price has skyrocketed this year alongside other fuel-cell and alternative-energy stocks in the hope that the companies will be big players in a “hydrogen economy.” Fuel cells use chemical reactions to produce electricity from hydrogen and oxygen.

“The ‘hydrogen economy’ will never happen,” the firm wrote in a research note. “Hydrogen energy will have only very niche use cases.”

Increased regulation of greenhouse gases, growing investor pressure on companies to reduce carbon emissions and technological advances have many thinking the hydrogen hype is real this time. Management consulting firm McKinsey & Co. estimates that hydrogen could account for 14% of power used in the U.S. by 2050, from next to nothing today.

Another factor in the heightened interest in green hydrogen is the steep decline in the price of renewable energy, which Mr. Friedmann says now accounts for 50% to 70% of the cost of green hydrogen. The cost of building wind and solar farms has fallen in recent years as technology costs have declined and more projects are built at scale. Wind and solar now rival natural gas as the lowest-cost means of power generation.

“You are going to see a lot of countries and states going after hydrogen,” Mr. Friedmann says.

Along with the Neom partners, other investors big and small are betting that green hydrogen is finally positioned to realize its full potential. Global expenditures on hydrogen projects are projected to top $400 billion between now and 2030, followed by more than $2 trillion in spending from 2030 to 2050, investment bank Evercore ISI estimates.

Some auto makers, including Toyota Motor Corp. and Honda Motor Co., are developing vehicles with hydrogen fuel cells, which convert the fuel into electricity.

Several major utility companies, meanwhile, are looking into running power plants on hydrogen instead of natural gas, which is now the nation’s primary fuel for electricity generation. Unlike wind and solar farms, gas plants can run all the time, or fire up quickly to meet peak demand.

The Los Angeles Department of Water and Power, the nation’s largest municipal utility, is spearheading a $1.9-billion effort to convert a coal-fired power plant in Utah to run on natural gas and hydrogen produced with wind and solar power.

In northwestern New Mexico, developers are planning to spend up to $2 billion on a hydrogen-fueled power plant to serve electricity customers throughout the West starting in 2024. The Libertad Power Project, as the plant initiative is known, will use so-called blue hydrogen, which is produced by carbon-capture technology, before transitioning to green hydrogen as it becomes cheaper and more widely available. Carbon capture involves catching the carbon atoms upon production and storing them so they can’t enter the atmosphere.

For all its promise, green hydrogen faces many hurdles. These include the intermittence of solar and wind power and the high cost of electrolyzers, complex systems that traditionally have required large capital investments but which are now falling in price. Despite declines in the cost of renewable energy, green hydrogen production plants will need high utilisation rates, or almost round-the-clock power, to make them profitable.

Hydrogen is hard to store in gaseous form and is expensive to liquefy, which is why the Neom project plans to convert it to ammonia for transport. It can also weaken metal on contact, making it difficult to transport via pipeline unless it is blended with natural gas or other substances.

Columbia’s Mr. Friedmann says the barriers to widespread use of green hydrogen are related not to technology but to infrastructure. Governments and companies will need to invest heavily in power grids, ports, pipelines and fueling stations that can accommodate hydrogen. The costs of doing that will be borne across the global economy if governments implement sound public policy to drive market investment, he says.