When Some Investors Look at Stocks They See Dollars, Not Shares

When Some Investors Look at Stocks They See Dollars, Not Shares

A new way of stock-market wagering is taking hold among younger investors who prefer to think about how much they can spend instead of how many shares they can afford. 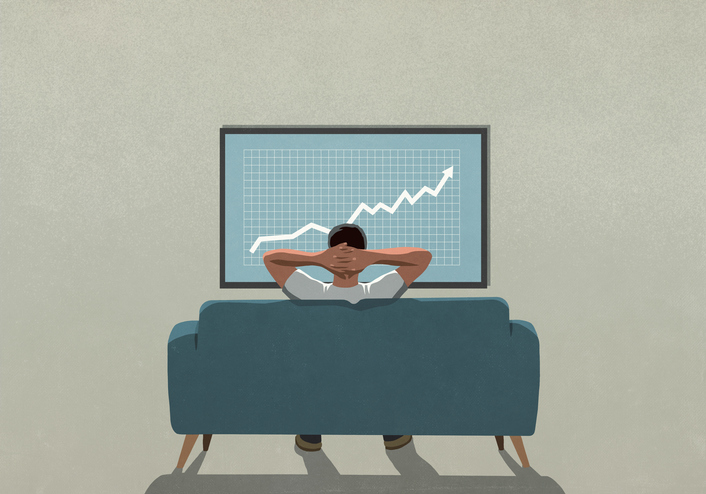 Purchasing a piece of Apple or Tesla once meant calculating how many shares you could afford to buy. That no longer matters. Now you can pay whatever you’re willing to spend, even if that amounts to pocket change.

Thinking primarily about dollars instead of shares represents a dramatic shift in the world of personal finance, posing new opportunities and risks for investors. The practice is gaining momentum thanks to the widespread adoption of fractional trading—which allows investors to purchase slivers of traditional shares—as well as an industry push to reduce online trading fees to zero.

These twin developments made it easier and more cost-effective for new investors to wager as little as $1 on stocks. The volatility of the coronavirus pandemic then turbocharged these bets as market leaders like Apple Inc. and Tesla Inc. soared into the hundreds or thousands of dollars. The S&P 500, meanwhile, is up 73% since its intraday low point in March 2020.

The lineup of wealth managers catering to dollar-focused investors is spreading from upstart online brokerages that rely on flashy apps to industry stalwarts that have longstanding bricks-and-mortar offices around the U.S. One of those giants, Fidelity Investments, launched a service early in 2020 called Stocks by the Slice allowing investors to purchase fractional shares for the first time. When Stocks by the Slice launched last February, 75% of the buy trades from investors using the service were in dollars on average. This month Fidelity now says that figure is closer to 85%.

In the future “retail investors will be thinking 100% in dollars, not in shares,” said Scott Ignall, head of Fidelity’s retail brokerage business. “Clients no longer need to use a calculator to figure out how many shares of stock they want to buy.”

Advocates say the dollar-first approach is helping democratise access to the stock market and open the wealth management industry to a new wave of investors. There are also dangers. Some say the strategy could encourage risky speculation that some analysts and academics warn will end with individuals losing money. Thinking in dollars, some worry, will distance new investors from their investments or inhibit their greater understanding of market moves.

“If you give people a smaller sandbox to make mistakes, they’ll still make mistakes,” says Larry Harris, former chief economist for the Securities and Exchange Commission and professor of finance at the University of Southern California’s Marshall School of Business. “But also when you make mistakes, you can learn at a lesser cost.”

The ability to pay micro amounts and hold fractional shares when purchasing stocks isn’t necessarily new. Investors have long paid little for penny stocks and small-cap stocks, while others have been able to amass portions of shares through dividend-reinvestment plans. What is new is the ability to freely trade partial shares during market hours. Brokers like Fidelity and Robinhood Markets Inc. can now execute fractional orders immediately, much as they execute ordinary orders to trade stocks or exchange-traded funds.

“Surely, people had to think in dollars before,” Mr Harris said. “Now, they just don’t feel the constraints.”

That is the case for James Evans, a 29-year-old bar and night club manager in Manchester, England. When the pandemic hit Manchester, he was furloughed with more time on his hands to think about his personal investing strategy.

Mr Evans uses Trading212, a London-based trading app, to “build his own ETF,” as he puts it, with fractional buys. He said thinking in dollars gives him more freedom to diversify his portfolio and establish a stronger position.

“This has given me a lot more time to look at what I’m doing, as opposed to just kind of winging it,” he said. “The pandemic has kind of helped that, just in a weird way.”

Robinhood, which was founded in 2013, is one of the biggest beneficiaries of this shift. Its free app now has 13 million users with a median age of 31. Investors can start investing for as little as $1, but the most commonly-traded amount on Robinhood’s recurring investment feature—which makes investments in dollars—is $10 every week.

Account holders “want to not do the math,” said Madhu Muthukumar, head of product at Robinhood.

Robinhood’s recurring investments option allows users to put a set amount of money toward given investments on a weekly or monthly basis. The company says the feature was in response to users who aren’t day traders but wanted an investment option they could build into their otherwise low-tech financial lives.

Larger rivals are now embracing the same approach. Last June Charles Schwab Corp. launched a fractional-trading program called “Stock Slices” that had nearly 190,000 accounts as of December. Schwab estimates the average Stock Slices user is younger than its average brokerage customer. Their average buy order is $275, according to Schwab, still well below the going stock price of companies like Tesla and Netflix Inc.

“We’re seeing growth across all kinds of clients, but we have seen a lot of growth in our younger user base,” said Fidelity’s Mr. Ignall. “We do think that this new way of investing has definitely contributed to that growth.”

For Mr Evans, the 29-year-old nightclub manager, thinking in dollars as opposed to shares demystifies the process. He employs dollar-cost averaging, a strategy that invests the same amounts of money at regular frequencies over time, to build his portfolio. This strategy makes it easier for novice investors to set up their investments with the amount of money they want to spend—and it is also often the only option available to younger, newer players who don’t have lots of money to invest in the market.

But as Mr Harris points out, all investors should be thinking about dollars in some capacity. Stock prices can go up and down depending on the total value of a company’s equity or the amount of shares left to buy.

Ultimately, Mr Harris said, the best way to purchase stocks is a personal decision for many investors: “Do you feel richer owning the number of shares you own or the dollars you own?”