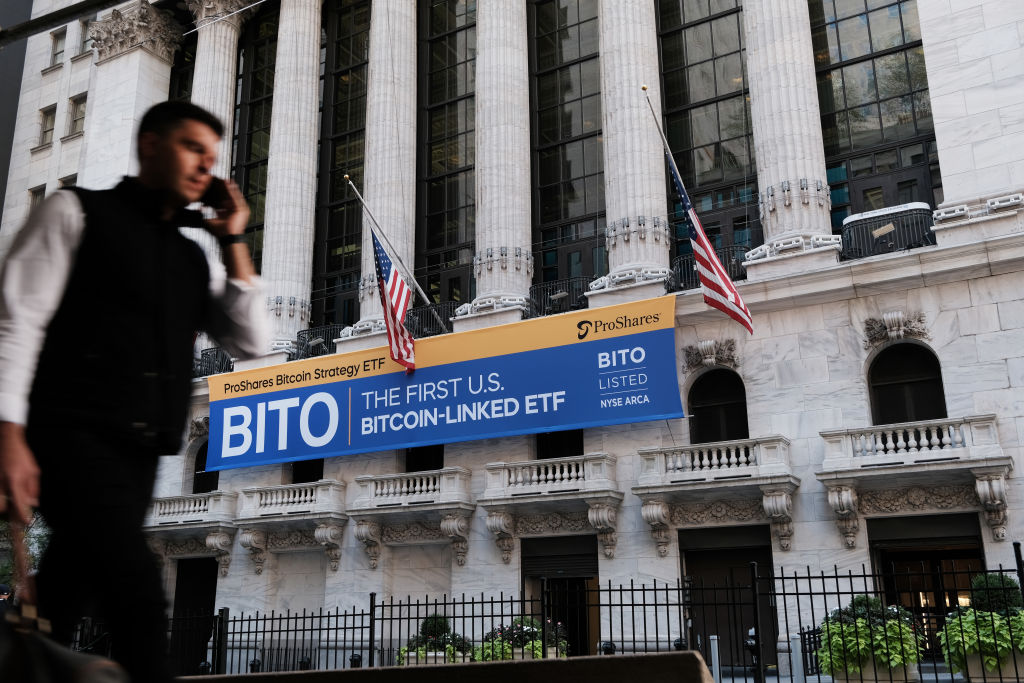 The first bitcoin-focused exchange-traded fund rose in its trading debut Tuesday after getting a warm reception from investors.

The ProShares Bitcoin Strategy ETF climbed most of the day, gaining nearly 5% to settle at US$41.94. About US$981 million of shares changed hands over the session, making it the second-most highly-traded ETF debut ever, according to Elisabeth Kashner, director of ETF research at FactSet.

The launch is being closely watched on Wall Street, where finding a way to sell securities linked to bitcoin has been a priority for many firms. Bethesda, Md.-based ProShares rang the bell at the New York Stock Exchange on Tuesday to celebrate the launch of its ETF, which goes by the ticker BITO and holds bitcoin futures contracts rather than the cryptocurrency.

“There are a multitude of investors who have brokerage accounts and are comfortable buying stocks and ETFs,” said ProShares Chief Executive Michael Sapir in an interview. “We think this will appeal to them.”

Among the fund’s first-day investors was Thomas Johnson, who is 33 years old and works in pharmaceutical sales in Orlando, Fla. Soon after the fund started trading, Mr. Johnson said he used about 15% of the assets in his retirement account to buy shares of the fund.

“I see cryptocurrencies as a whole as something that will outperform the stock market,” said Mr. Johnson.

He added that it was his first ever purchase of an ETF, although he started buying bitcoin a year earlier.

Other asset managers are expected to launch similar funds, including Valkyrie Investments, VanEck and others. But one of the biggest global asset-management firms, Invesco, on Monday put its bitcoin futures ETF on hold.

“We have determined not to pursue the launch of a Bitcoin futures ETF in the immediate near term,” an Invesco spokeswoman said in a statement. The firm said it is committed to working with its partner, Galaxy Digital Holdings, on an ETF that holds crypto rather than futures.

Invesco didn’t elaborate on the decision.

The firm amended its filing late Monday, pushing the fund’s effective date toward the end of the month rather than withdrawing it altogether, signalling the ETF might still launch later on.

Thomas Lee, a managing partner at research firm Fundstrat Advisors, said the ProShares ETF will enable more individuals to invest in bitcoin. He said assets in the fund could rise to as much as $50 billion from the $20 million the fund started with on Tuesday.

Bitcoin has climbed 48% since September, reflecting in part purchases driven by the prospective launch of the ProShares ETF and rivals.

The ETF came online following an eight-year effort by asset managers to create funds that hold actual bitcoins. The Securities and Exchange Commission, which hasn’t supported that approach because of concerns that bitcoin trading isn’t transparent enough to protect investors from fraud and manipulation, instead steered asset managers toward the creation of a bitcoin futures product.

Unlike digital currencies, futures trade on regulated venues such as the Chicago Mercantile Exchange.

Futures-based ETFs are sometimes hampered by discrepancies between the futures market and the underlying assets they track.

Asset managers say that is a trade-off some investors are likely willing to make to get exposure to crypto through the more-regulated futures market.

“That’s what I’m counting on. Other investors will see value in the ETF, or at least more of a safety net and be more willing to invest” in crypto, added Mr. Johnson.

Even with the promise of regulatory oversight, SEC Chairman Gary Gensler warned investors Tuesday that bitcoin futures remain just as risky as the cryptocurrency itself.

“It’s still a highly speculative asset class and listeners should understand that underneath this, it still has that same aspect of volatility and speculation,” Mr. Gensler said in a CNBC interview.