With zero-carbon emissions, hydrogen was supposed to be an energy cure-all. So why aren’t we filling up our cars with it? 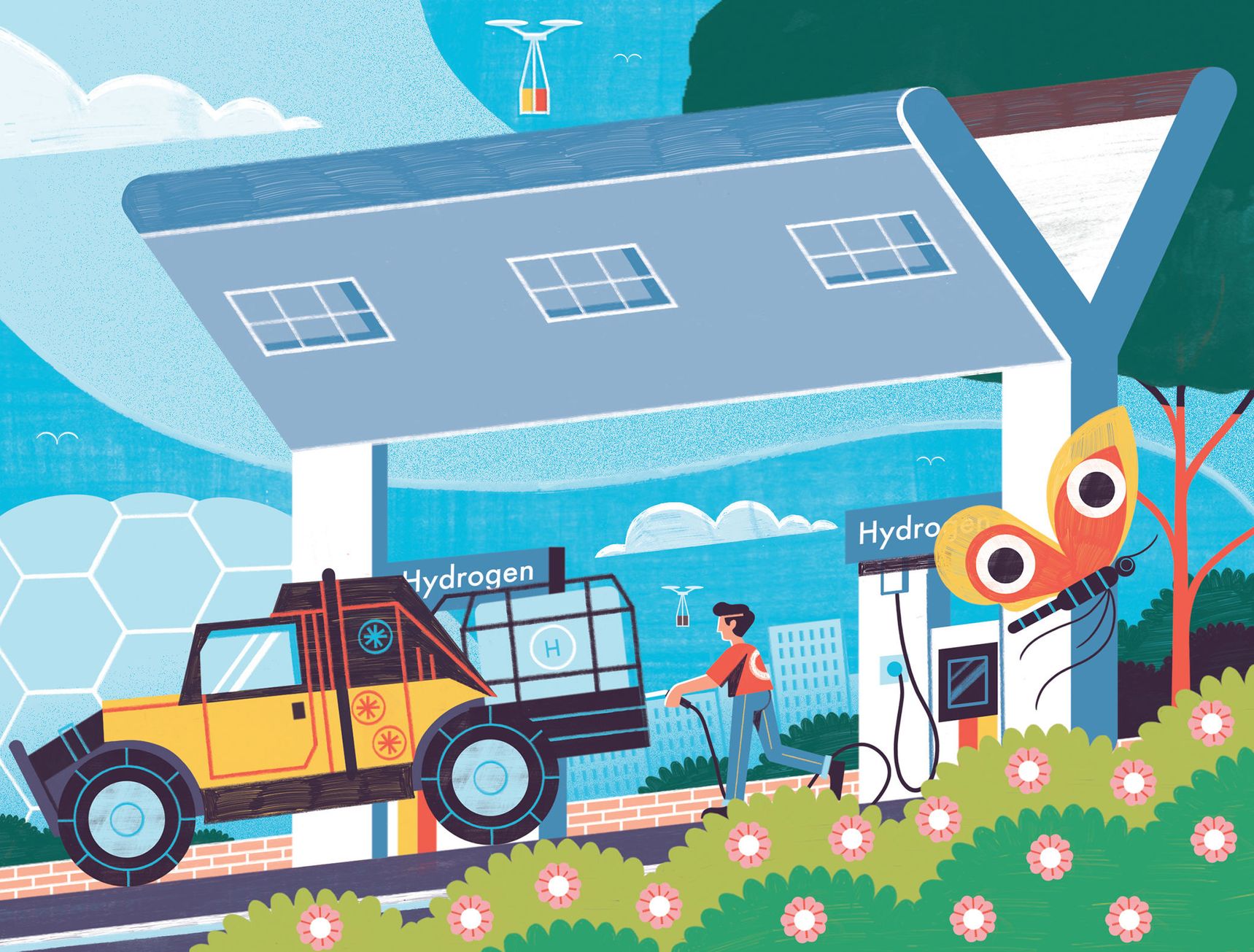 If this were a party, and you sat down and asked, “Why not hydrogen-powered cars?” you could be in for a long night. May I get you an espresso?

I get this question a lot. People wonder, given the current limits of battery technology, whether a hydrogen-powered car, using a fuel cell device to convert compressed hydrogen into electricity, would have longer range and quicker refill/recharge times.

Yes, if first you have the hydrogen. Preferably liquid hydrogen.

People assume hydrogen is abundant. It isn’t—not in a readily usable form. Atomic hydrogen bonds tightly to whatever is around. In the case of hydrocarbons, hydrogen has a death grip on compounds of carbon; in the case of water, it doesn’t want to quit oxygen.

Hydrogen is liberated from water in a process called electrolysis, using electricity to break its bond with oxygen. To separate H2 from fossil fuels—typically, natural gas, or methane—the process is called steam reforming. Neither is particularly efficient. Electrolysis can reach an energy efficiency up to 80% using best practices. That means it takes 50-55 kWh of energy—and associated emissions—to liberate 40 kWhs worth of “zero-emission” hydrogen.

Steam-methane reforming is about as efficient but the process produces intense carbon emissions, several times the hydrogen extracted, depending on the feedstock. It also requires a non-trivial sum of energy to compress H2 into a storage device—a hydrogen tank—so it might be used in an automobile.

Once on board, hydrogen’s ROI takes another hit at the fuel cell, a stack of permeable membranes where hydrogen is married with oxygen to produce water and electricity. The most efficient such devices yield about 60% of the potential energy, which knocks the system’s well-to-wheel efficiency down to 30-40%, comparable to that of a typical internal-combustion vehicle.

All of which is to suggest why, if your national energy policy aim is lower carbon emissions per unit of economic activity, hydrogen-based transportation has a hard time scaling.

How’s that coffee? Ready for another?

But even if zero-carbon hydrogen flowed like honey from the rock, it would be difficult to transport and deliver to millions of automobiles on a retail basis. Take pipelines: The infrastructure the oil-and-gas sector uses to move natural gas (methane) cannot readily be shared with compressed hydrogen.

Or fueling stations: The costs of the few publicly accessible H2 fueling stations that have been built in the last decade (there are currently 48 public H2 stations in the U.S., 47 in California and one in Hawaii) have been many times higher than those associated with conventional gas stations. These costs typically include a natural-gas reformer on site, avoiding the necessity of aforementioned pipelines and high capacity tanks. They also reflect the costs of compliance with federal, state and local regulations having to do with letting granddad pump his own high-pressure space fuel. Somebody at the city council meeting yells Hindenburg in three, two, one…

Hydrogen does have some lovely physical properties. Chief among them is high energy density by mass. A kilo of hydrogen embodies about three times the energy content (120MJ/kg) as a kilo of gasoline (44 MJ/kg, equivalent to six properly fused Molotov cocktails).

On that account, hydrogen mops the floor with the best lithium batteries. Tesla’s new 4680 cells may pencil out to, at best, 300 Wh/kg. The most energy-dense solid-state batteries on the horizon might deliver two to three times more. It still sums to less than 1kWh per kilogram, a fraction of hydrogen’s energy-carrying capacity.

And yet, outside of a few small-scale projects and compliance cars such as the Toyota Mirai, the entire automotive world is turning to batteries. Why?

In light vehicles, hydrogen’s limiting factor has always been its low energy density by volume—the size of the bottles, in other words. A typical automotive-grade pressure vessel might be a cylinder three feet long and one foot in diameter, nominally (3:1 ratio), heavily overwrapped with carbon-fiber reinforcement and pressurized to 350-700 bar. Such a bottle holds a precious 5.6 kg of H2, worth about 185 kWh.

However, again taking into account the losses at the fuel cell, the effective capacity is more like 111 kWh, comparable to current and conventional lithium battery technology. In this way hydrogen has a range problem too.

The thing is, if you need to move energy in bulk, or just move bulk, H2 is your friend. Test fleets of fuel-cell-powered heavy trucks are already on the road, as well as locomotives, ships, buses, and other applications where dimensional space isn’t quite so dear as in light vehicles.

Hydrogen could play a role in EV-charging infrastructure, especially in remote or delicate areas where wise policy would avoid generators, power lines and substations. Imagine an H2/EV station set up outside a national park, quietly producing electricity with a stationary fuel cell, using truck-delivered H2. “Compressed hydrogen is really a way to truck electricity around,” said David Reichmuth, senior engineer with the Union of Concerned Scientists.

Or you know what would be really cool? Liquid hydrogen (LH2), stored at -253 C. One cubic meter of cryogenic hydrogen represents about 2,343 kWh worth of energy, roughly equivalent to the stored energy of 23 fully charged Teslas.

And yet I know of only one effort to exploit cryo-hydrogen’s potential on four wheels: the Glickenhaus HFC Pickup. The work of Scuderia Cameron Glickenhaus (SCG) in Sleepy Hollow, N.Y., the HFC Pickup will be battle-tested in a future Baja 1000 off-road race, possibly using swappable tanks of liquid hydrogen to refuel on course.

And you thought it was hard to keep the beer cool.