How Skiing Can Survive Climate Change

How Skiing Can Survive Climate Change

From artificial clouds to autonomous snow-grooming vehicles, here are 12 ways for ski areas to weather warmer temperatures and less snow. 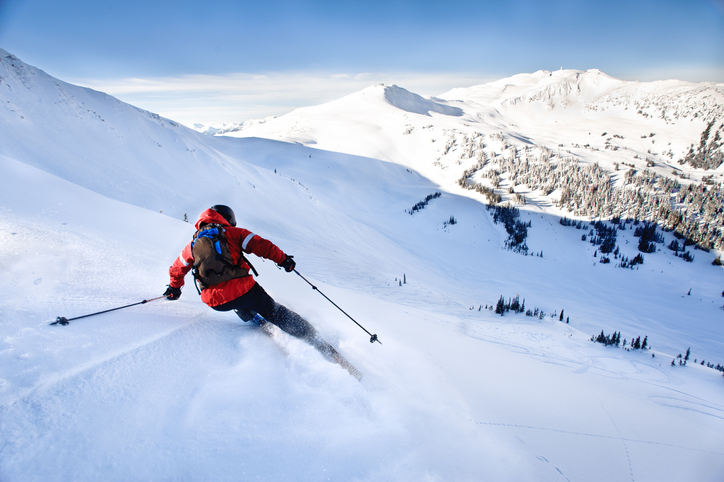 Downhill skiing could become an increasingly exotic proposition in a warming world. By midcentury, the U.S. could see 90 fewer days below freezing each year, according to a 2016 study published in the Journal of Climate and based on data from the federally funded North American Regional Climate Change Assessment Program. Nearly all ski areas in the U.S. are projected to have at least a 50% shorter season by 2050, according to a 2017 study funded by the Environmental Protection Agency and published in the Global Environmental Change journal.

Higher temperatures make snow more elusive on the slopes, cutting into revenues for ski areas. Low snow years between 1999 and 2010 already cost ski areas an estimated $1 billion in revenue, according to a 2012 analysis commissioned by the nonprofits Protect Our Winters and the Natural Resources Defense Council.

Today, ski areas run snow guns 24/7 as soon as cold weather hits and send GPS-guided snowcat vehicles to the slopes to distribute snowpack. Snow-making technologies are making rapid advances and could alleviate some of the burden of weather volatility. Winter skiing could also be less of a focus as resorts become year-round destinations and offer more activities. Climate change presents ski areas with an opportunity to reduce their own carbon footprint by switching to cleaner energy sources.

From autonomous snowcats to solar-powered properties, take a look at what ski resorts might look like in the coming years.

Modifying clouds to boost mountain snowpack, or cloud seeding, has been done over Colorado’s ski areas for decades, but was scientifically proven effective only last year. It involves using generators to spray silver iodide into a frigid cloud to turn water droplets into snow, and it can increase snowfalls by up to 15%, says Neil Brackin, the CEO of Colorado-based Advanced Radar Co., a firm that sells weather radar systems. Tomorrow’s generators may be more accurate and deliver more advanced seeding materials into the sky, Mr Brackin says. Cloud-seeding programs could cost ski areas $100,000 to $1 million annually, he says.

Neuschnee GmbH, an Austrian startup, has invested more than $2.2 million to develop a balloon-shaped chamber that artificially recreates a snow-making cloud. Ice particles injected into a wooden-framed structure propped on steel rods and wrapped in nylon membranes bind to water droplets to make up to 1,000 cubic feet of snowflakes a day, enough to fill a midsize truck. Founder Michael Bacher says ski resorts could use the technology to give runs a natural feel and imagines a future where operators deploy fleets of autonomous artificial clouds. The company is looking for new partnerships to continue development.

Mountain Biking Is the New Skiing

Mr Snow, a German startup, sells a carpetlike faux ski hill that rolls out like a mat and has an arrangement of loops on the surface that reproduces gliding sensations, says Jens Reindl, one of the company’s founders. Mr Reindl says the product is beginner-friendly and could become popular in low-altitude ski resorts near urban centres. The mat, which is available for sale in the U.S., comes in modular 65-by-6.5-foot patches and costs $120 for every 10 square feet.

In the future, it may take skiers more twists and turns to reach the bottom of the slope as ski operators seek to have more people use the same patches of snow, says Joe Hession, the majority owner of Mountain Creek Resort in New Jersey. Moving snow blocks to create more jumps, rails, gradual hills and big turns could allow resorts to focus their snow-making capacity on selected segments and do more with less terrain, he says.

Temperature increases mean ski resorts will have shrinking windows of cold weather to produce artificial snow, says Brian Fairbank, chairman of the Fairbank Group, which operates three ski resorts in the Northeastern U.S. More efficient, cheaper snow guns that pump out more snow could help make up for this change. One recent innovation is the “Sledgehammer,” a $3,150 snow gun developed by Fairbank that it says converts twice as much water into snow per hour as traditional machines and performs better at higher temperatures for about half the price.

Ski resorts could increasingly turn to green infrastructure like solar panels and wind turbines with the goal to operate 100% on renewable power and diminish their own carbon footprints. Wolf Creek Ski Area in Colorado purchases most of its electricity from green sources year-round, including a 25-acre off-site solar farm. Mountain Creek Resort relies on goats to mow the grass on the slopes in the summer rather than use fuel-intensive machinery. More operators are expected to adopt renewable energy in the future, says Adrienne Saia Isaac, the director of marketing and communications at the National Ski Areas Association, an industry group. “We as an industry can’t simply rely on pivoting to summer business as a climate change solution,” she says.

Making Snow When It’s Not Freezing

The Italian startup Nevexn has developed Snow4Ever Thermal, a container-size chiller that freezes water to make up to 1,700 cubic feet of snow a day, almost enough to cover a tennis court with a foot of snow, at above-freezing temperatures. The machine uses solar thermal energy and energy from burning biomass such as wood pellets. The company developed the system with a $2.1 million grant from the European Union and tested it in the Italian Dolomites last year, says Francesco Besana, a co-founder. It plans to commercialize it in the coming years.

From Ski Resorts to Entertainment Resorts

Ziplines, climbing walls, water attractions and mountain roller coasters could be increasingly offered year-round as resorts endeavour to be less reliant on winter sports. This shift could come with a new focus on immersive educational experiences like night walks and light shows that introduce visitors to a mountain’s geological history, says Mr McSkimming of Select Contracts.

Indoor ski areas could make up for seasonal variations and provide access to new markets in urban areas, says Dr Natalie Ooi, the director of tourism enterprise programs at Colorado State University. Big Snow American Dream, the country’s first indoor ski area, opened in New Jersey in 2019 and could provide a blueprint for future investments. It boasts a 4-acre skiable area that operates at minus two degrees celsius and has a 48-metre vertical drop, four lifts and snow guns.

Customers could get much better deals by pre-buying season passes to access more resorts, including internationally, as the industry moves to insulate revenues from weather variations, says David Perry, an executive vice president at Alterra Mountain Co., the ski-resort giant. He anticipates passes will represent 60-70% of Alterra’s ticket sales in the coming years, up from 40-50% today. Resorts could also start selling megapasses valid both in summer and winter, says Auden Schendler, a senior vice president in charge of sustainability at Aspen Skiing Co.