5 New Wallpapers That Will Take Your Room Back To Nature

5 New Wallpapers That Will Take Your Room Back To Nature 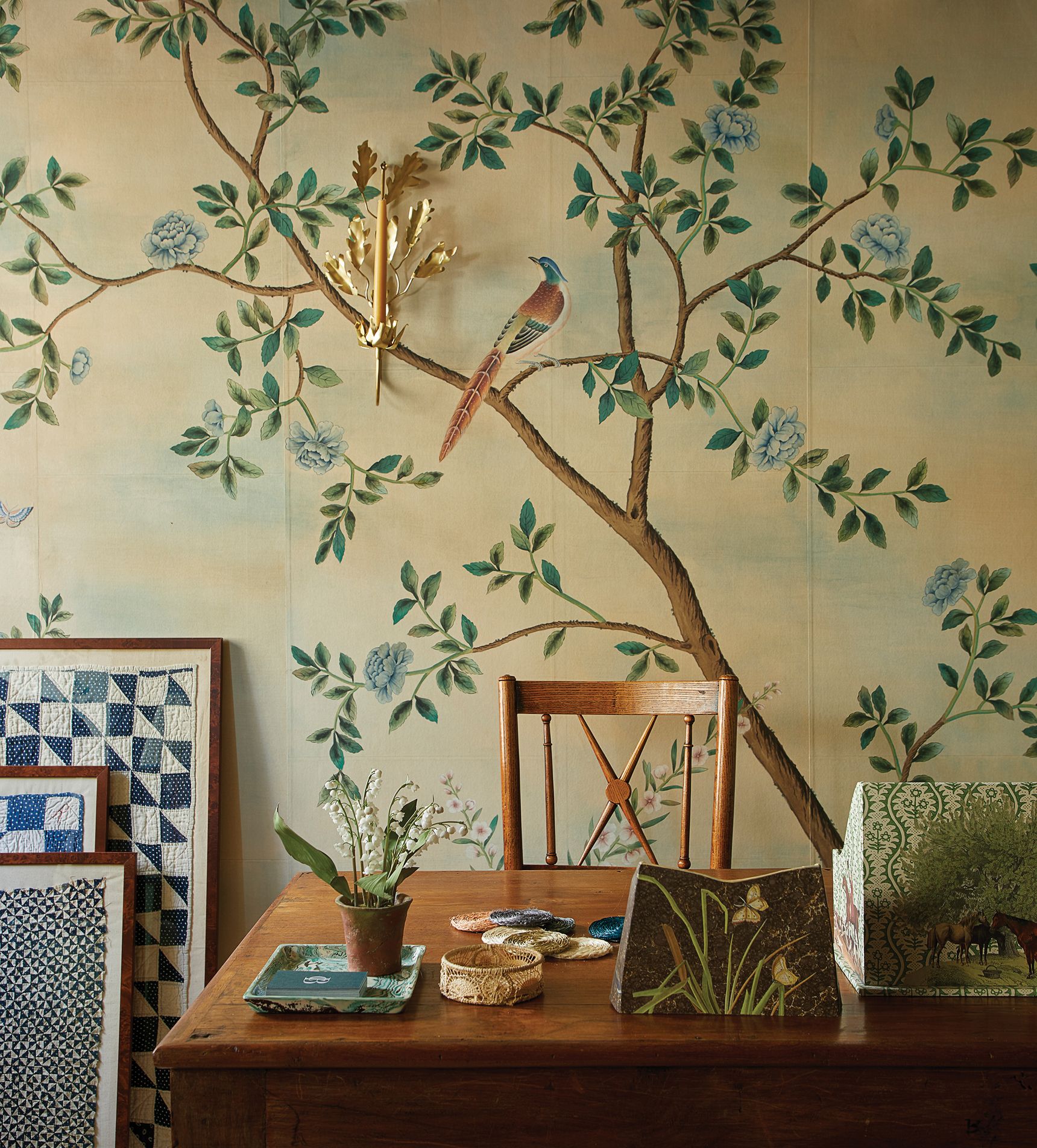 According to interior designer Michael S. Smith, certain elements involved in decorating have the feel of magic. Among them he counts wallpaper, with its ability to lend flat surfaces the illusion of depth. A new collection of five wallpapers of Smith’s own design launches this season in collaboration with de Gournay, a British company that specializes in custom, hand-painted panels. “It’s all ideas I’ve been carrying around in my head, things I’ve wanted to use for a long time,” says the Los Angeles–based Smith, who is best known for redecorating the Oval Office and White House residential quarters for the Obamas. “To put them all together as an arsenal or box of crayons is amazing.”

“Michael is one of our most longstanding clients,” says Hannah Cecil Gurney, de Gournay’s director, whose father, Claud Cecil Gurney, founded the company in the mid-1980s. “He came to us and said, Look, if I’m wanting this particular kind of look and feel for wall coverings that I can’t currently find, then it would be silly not to offer them to the world.”Each of the wallpapers in Smith’s series draws inspiration from the natural world, be it the softly coloured stone of Istanbul’s Hagia Sophia or the bird-filled trees on the tiled murals at Lisbon’s Palácio dos Marqueses de Fronteira. Smith took the idea for Botanical Studies from 18th-century Swedish botanist Carl Linnaeus’s studio, which was hung with prints and engravings of heliotrope, gardenia and other flora.

In the spirit of Smith’s polished eclecticism, de Gournay invited five decorators, makers and curators from varied backgrounds to each use one of the wallpapers in the context of their own work. The English antique dealer Edward Hurst chose Botanical Studies for the bedroom of a client’s Dorset manor house, pairing the panels with a Chinese black-and-gold lacquer cabinet set on a Chippendale-period stand and a neoclassical George III canopy bed. “It sort of vibrates in the room,” says Hurst of the paper.

Ceramic artist Peter Ting, co-founder of Ting-Ying gallery, hung Pantheon, an intricate design that recalls natural stone, at home, alongside his collection of artworks and porcelain. He immediately noticed the paper’s partial glazing, “as if it has been polished by centuries of touching, like real marble would in a powerful and spiritual place like the Pantheon.”

British-born Ghanaian furniture designer Kusheda Mensah used Uki Hana, a wallpaper inspired by the chrysanthemums of Edo-period Japanese artworks, to create an immersive environment within a London creative space. Mensah set the wallpaper against her own curvilinear, modular furniture. The panels are gilded with a golden-brown copper leaf at the bottom that gives way to a lighter aluminium leaf toward the top, mimicking the soft, tarnished gleam of 17th-century Japanese folding screens. Mensah says she was surprised by de Gournay’s level of customization: “One of the designers just got out her paintbrush and literally started drawing flowers onto the wallpaper to expand the pattern and print.”

“They’re game for anything as long as it’s grounded in fundamental quality,” says Smith of de Gournay, which gives clients the opportunity to collaborate with its team of in-house designers and painters. “I felt entirely included in the creative process,” says Amanda Brooks, who used Nordic Garden, Smith’s interpretation of a rococo-era Swedish wallpaper, to decorate a temporary retail space next door to her Oxfordshire home-goods shop, Cutter Brooks. “We changed the colour of a couple of birds and some berries, moved motifs from one panel to another and altered the deep teal colour to better match my shop merchandise,” she says. British design dealer Jermaine Gallacher, meanwhile, took Braganza, a wallpaper that references porcelain tile, off the wall. He suspended the paper on movable panels in his London showroom, its tile-like grid acting as a backdrop for sets of his own creation.

Smith says seeing the diversity of responses to his designs was inspiring. He partly credits de Gournay’s success with a broad resurgence of interest in wallpaper. “After years of a kind of minimalist thing,” he says, “people are realising how pattern and colour can make a room so much more beautiful.”