How to Tell the Boss You’re Burned Out

How to Tell the Boss You’re Burned Out

We’re sharing more at work these days, but it can be risky to confess to being overwhelmed. 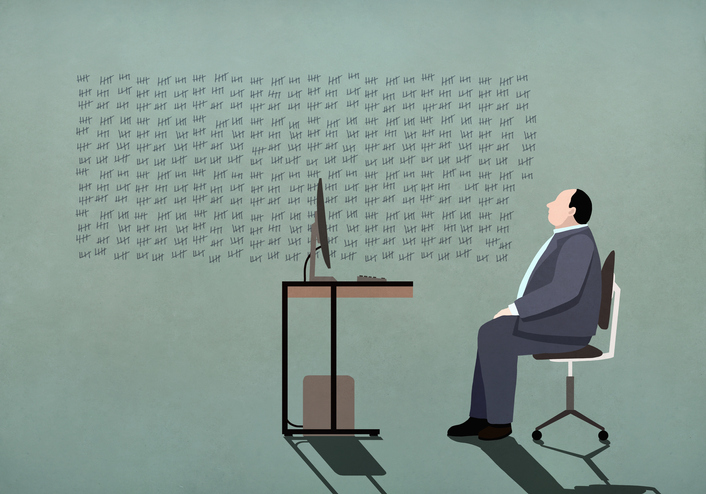 You’re burned out at work. Does your manager need to know?

More than half of workers surveyed by the Conference Board in September said their mental health has degraded since the start of the pandemic, with rising workloads and blurred boundaries as top culprits. Companies have stayed lean after layoffs, and the recent flood of job quitters means workers who stay have more to do. Nearly two years of a global health crisis have left us feeling overwhelmed—and getting more comfortable admitting it.

“So much was happening in the world that it became ok to say, ‘Yeah I’m not good,’ because nobody was good,” says Taisha Caldwell-Harvey, founder of the Black Girl Doctor, a therapy and corporate wellness practice. “More people are open to saying, ‘I need help.’ ”

Still, talking about burnout with a boss isn’t the same as talking about it with a friend. Stigma around mental-health challenges is real, psychologists warn. How can you get some breathing room, and back to feeling like yourself, without jeopardizing your career?

You don’t need to share just for the sake of sharing, Dr. Caldwell-Harvey says. “The goal is to share so that you can ask for what you need.”

Assess what it would take to stop feeling overwhelmed, and think about whether you really require permission to get it. Can you attend virtual therapy on Thursday mornings without telling your boss? Do you need a deadline extension, different work hours or a leave of absence? Speak up if you need to, and mention burnout by name if your colleagues seem supportive of diverging viewpoints and mental-health struggles, Dr. Caldwell-Harvey says.

But keep it simple. Your manager isn’t your therapist, she adds.

For all the risk, a lot of positives can come from sharing how you’re really doing—deeper trust with colleagues, permission for others to open up, a nudge away from a pressure-cooker work culture toward something more humane. You could be less miserable, and so could everyone else.

Elizabeth Rosenberg, 42, felt herself approaching burnout a couple of years ago while working for an advertising firm. An earlier bout had landed her in the emergency room, suffering from an intense migraine that left her unable to move. She didn’t want to go back to that. But she worried she’d be perceived as weak or unable to handle her job if she confessed how she was feeling.

She came up with a specific ask: She wanted to take off an entire month. She picked August, when business tended to be slowest, and approached her boss in January, giving him plenty of time to prepare for her absence.

“There was no emotion in it,” she says of how she presented the idea. She told him she was burned out and would have to leave the company later that year if she couldn’t take a break. To her surprise, he said sure.

“If you don’t say something, nothing will change,” says Ms. Rosenberg, who went on to found the Good Advice Company, a marketing and communications consultancy in Los Angeles. “But you have to be brave enough to say something.”

Burnout can feel like a uniquely individual experience, as if you’re the only one who can’t keep pace. But workplace researchers say it isn’t just you.

Employees across industries feel worn down and used up because what they are being asked to do is unrealistic, says Erin Kelly, a professor at the MIT Sloan School of Management and co-author of the book “Overload: How Good Jobs Went Bad and What We Can Do About It.” The backlog of tasks, the lack of resources—it isn’t sustainable for long.

“There had already been a speedup in many jobs before the pandemic, and then we turned up that volume,” she says.

A yoga class or a meditation session isn’t going to fix the problem. Instead, Dr. Kelly’s research examining an overworked IT division at a Fortune 500 firm before the pandemic found that team interventions are what make a difference. Employees whose managers were trained to check in to see how they were doing personally and professionally, and to give them flexibility to work how they wanted, had significantly lower levels of burnout and psychological distress than a control group. They were also 40% less likely to quit.

Another thing that helped: workshops where folks shared their stress and plotted what the team could let go of, like superfluous meetings clogging their calendars.

“Employees reported that they just felt free,” Dr. Kelly says. “It’s going to be easier to approach as a collective project than to stick your own neck out as an individual.”

Anne Ngo started struggling last fall as the second wave of the pandemic hit Toronto, where she lives. Isolated in her apartment, working 12-hour days, she began having anxiety attacks, difficulty sleeping and back and shoulder pain. Demand at her job as a recruiter at Ada, which provides clients with AI chat bots, had come roaring back, and she was tasked with trying to fill 40 to 50 roles a quarter instead of the usual 20.

“I was just one person,” the 33-year-old said. She began to feel like a cog, never really having an impact as colleagues ordered up an ever-increasing number of new hires. Yet the job became her life.

“I just couldn’t shut off,” she says.

She waited until she had hit her goals for the quarter before approaching Chelsea MacDonald, the company’s senior vice president of operations.

“I needed to have leverage of, ‘I did well, but I did well compromising my own well-being, and I don’t think this is ok,’ ” Ms. Ngo says. “I’m pretty sure I just blurted out everything I’d been holding for months.”

Ms. MacDonald says she’s happy Ms. Ngo spoke up. Ms. Ngo started therapy and acupuncture, while Ms. MacDonald talked to other teams to help reduce the demands on her.

“The honest answer is the workload just has to change,” Ms. MacDonald says. Instead of workers suffering, “the business needs to feel a little bit of pain.”

By January, Ms. Ngo had won a promotion and was able to hire for her own team, to spread the load. She sometimes wishes she had said something earlier about her burnout.

Talking about it, she says, “was a relief.”