The Future of the Gym Is Hybrid (Just Like the Office)

The Future of the Gym Is Hybrid (Just Like the Office) 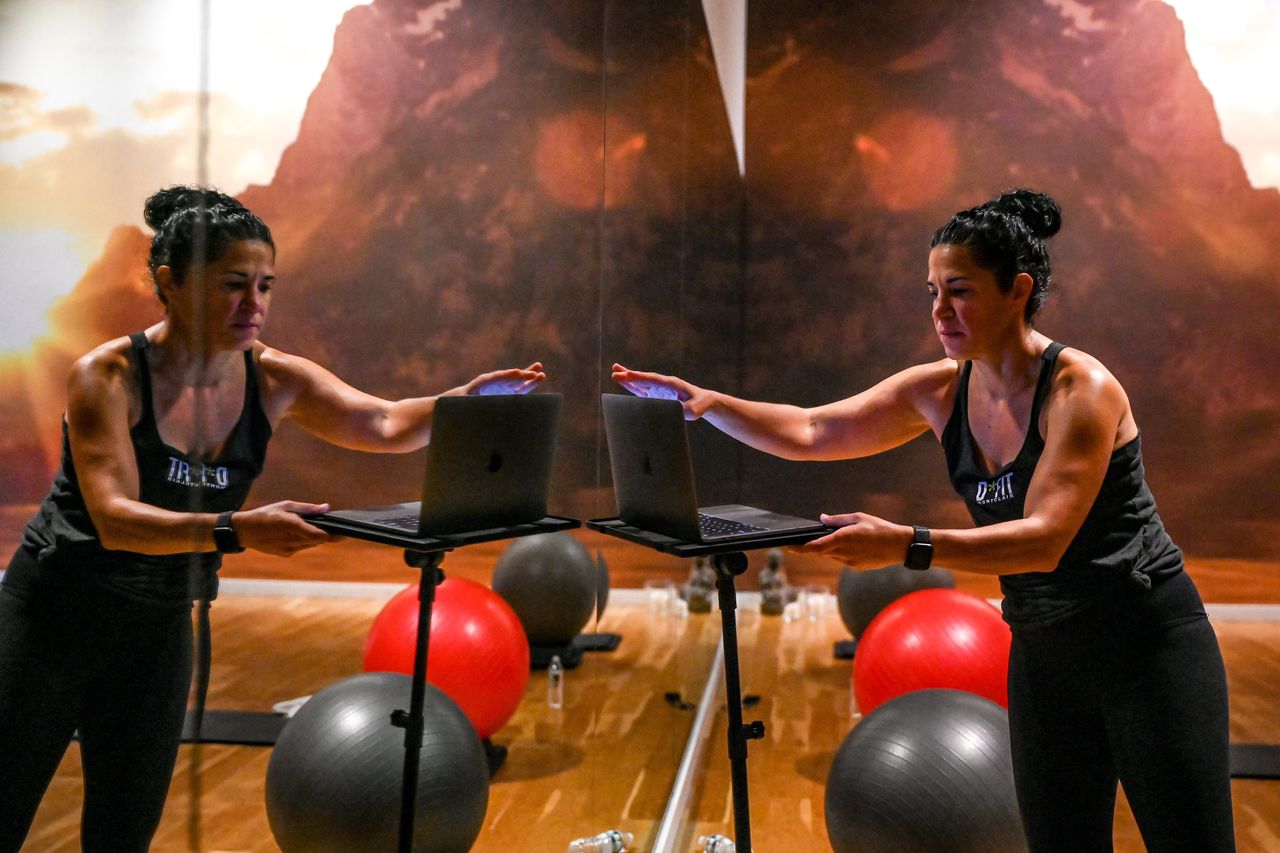 Every morning, Daniela Costanzo wakes up at 5, drinks a cup of coffee, feeds her two dogs, then heads to DFit, the Montclair, N.J.-based workout studio she’s owned for the past decade.

Last Wednesday was no different, except for one relatively new pre-class ritual Ms. Costanzo added to her routine during the pandemic. Before the early risers arrived for her first class, she powered on her laptop and started a Zoom meeting.

Two virtual clients popped on-screen, while eight students made their way into the studio. At 7:15 a.m., the crew started its full-body workout all together: a series of heart-pumping shoulder presses, squats, rows, lunges and core work.

In the Before Times, gyms and studios such as DFit were destinations—spaces with nice equipment, freshly laundered towels and, critically, no distractions from partners, kids or pets. Meanwhile, people who couldn’t get out used apps and connected platforms, such as Peloton, designed for home use. The pandemic forced the former to take a page from the latter, and many studios and gyms decided to continue providing home workouts, even after Covid restrictions lifted.

“I’m committed to it 100%,” Ms. Costanzo said. One reason, she says, is that going virtual is cost-effective. A Zoom business license costs about $20 a month. DFit currently offers six virtual classes a week, alongside indoor and outdoor workouts.

For now, the virtual classes are more of a necessity as the threat of the Delta variant looms large. While the studio is seeing more new clients looking to lose their pandemic pounds, attendance still isn’t at pre-Covid levels. Teaching over Zoom is also a drain on instructors, who typically draw energy from loud music and packed classes. Tracks have to be quiet, so students can hear the instructors.

“It feels like I taught four classes when it was just one. That’s how much energy it takes,” Ms. Costanzo said.

At the start of the pandemic, DFit instructors streamed live workouts free on Instagram. Some garnered over 100 participants—much more than a typical studio class. “For such a bad, uncertain time, the energy we felt through Instagram was phenomenal,” Ms. Costanzo said.

Clients can reserve classes through DFit’s online portal, which is operated by booking software Mindbody. About 12 hours before the class, a DFit employee manually emails each participant a Zoom link. Clients are charged normal prices—up to $25 a pop or unlimited access for up to $255 a month.

Ms. Costanzo’s regulars love the flexibility. “Right now, we’re in the heat of vacation season. But I have people joining us from Hawaii and from Germany.” One longtime client moved out of state to Philadelphia. “We’re thrilled we still have her as a client,” Ms. Costanzo said.

A Mindbody survey from February found that 65% of respondents intended to complete workouts both in person and at home in a post-Covid world. And in a survey from July, 86% of respondents who do virtual workouts said they continued to do them as much or more, even as studios are reopening.

Sunil Rajasekar, president of Mindbody, said that convenience is the push behind this consumer shift. “The experience is not the same as an in-person class, but it is way better than not taking the class at all,” he said. “It is also a great way for wellness businesses to expand their reach.”

During the height of the pandemic, Peloton and other at-home workout solutions soared, while gym operators struggled to survive. The International Health, Racquet & Sportsclub Association estimates one in four gyms permanently closed in 2020. Nationwide fitness chains Flywheel and YogaWorks permanently closed all studios that year.

“The chaos of the pandemic forced us to innovate,” said Joey Gonzalez, chief executive of Barry’s Bootcamp, which has 70 locations around the world, offering combination strength-and-cardio workouts.

Before 2020, Mr. Gonzalez wasn’t considering digital fitness for the company. The studios tout perks that can’t be offered in an app: workout rooms drenched in a nightclubby red glow, high-end treadmills with shock-absorbing belts, salon-grade products in its locker rooms and a recovery smoothie bar.

But Barry’s did eventually transition to Zoom workouts during the pandemic, featuring instructors streaming from their living rooms, dealing with audio and Wi-Fi issues like the rest of us.

“One of the most surprising things for us was people were coming to us from places where Barry’s doesn’t exist, like Dublin and Hong Kong,” Mr. Gonzalez said.

To reduce its dependence on Zoom, the company recruited an external agency to create its own Barry’s-ified live video-enabled workout experience, with trainers in a dedicated studio. Earlier this month, it launched Barry’s X, which streams via an app, website or the Forme smart mirror. Live streams cost between $12 and $20 a piece, or can be accessed through a monthly membership, which also includes a library of prerecorded workouts.

There’s some indication that the at-home boom is starting to bust. Peloton recently lowered the price of its original bike by 20%, in anticipation of slowing growth. And at the end of July, Barry’s studios were at 86% of pre-Covid attendance. But Mr. Gonzalez acknowledges that the Delta variant is hampering a full in-person comeback.

Equinox, the luxury gym chain, launched an on-demand fitness mobile app in March 2020, right as the global quarantine began. The app, called Equinox+, includes workouts from SoulCycle, Solidcore and other Equinox subbrands. A subscription costs $40 a month, but for Equinox members, who often pay upward of $200 a month, access to the app is included as a perk.

So it seems our desk-sharing, partially work-from-home future won’t be the only hybrid model in our lives. Some might refer to the new exercise paradigm as the hybrid gym. Others might say it’s “gym as a service.” I’m just hoping no one will call it “GaaS.”