Inside the 1920s apartment of architects Fanny Bauer Grung and David Lopez Quincoces. 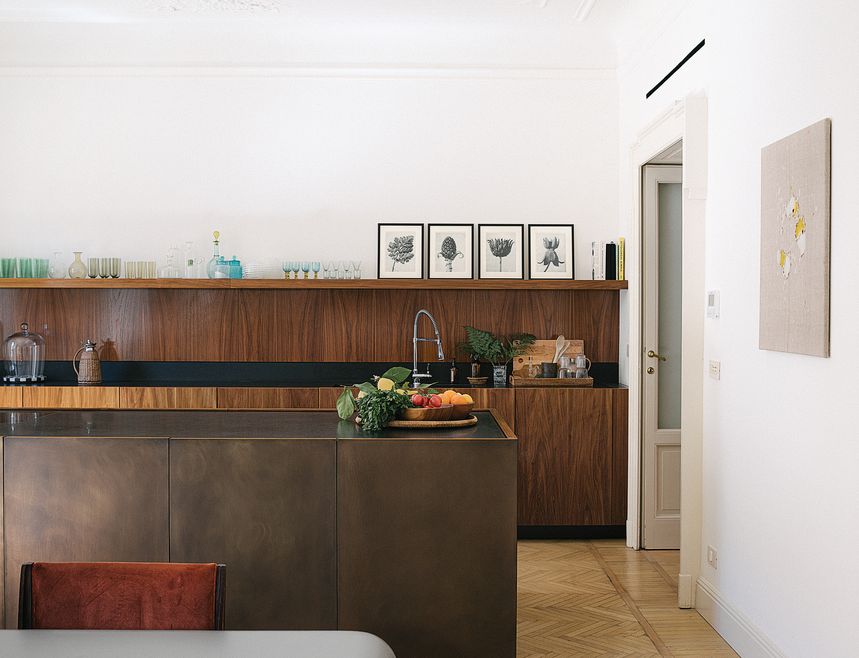 The issue with running a design gallery, according to architect Fanny Bauer Grung, is eventually having to part with the furniture. “This chair has been the source of problems,” she says, pointing to a simple wooden seat with angular armrests and a woven back. A flea-market find, it now sits next to the white marble fireplace in the Milan apartment that Bauer Grung, 32, shares with fellow architect David Lopez Quincoces, 41, her partner in life and work. The chair used to be on display in the couple’s design space, Six Gallery, where it caught the eye of a client. It wasn’t for sale, though, and the client left the gallery nearly in tears. “It’s a piece that is so dear to me,” Bauer Grung says, “so it had to come home.”

Bauer Grung and Lopez Quincoces, who together run the design firm Quincoces-Dragó & Partners, opened Six Gallery during Milan Design Week in 2018. The space, in a former monastery in the city’s Navigli district, soon got the attention of trend watchers and high-end collectors alike. While the private homes that the couple’s firm designs can be glimpsed only on the pages of shelter magazines, the gallery allows an up-close look at their approach, a mix of sophisticated Italian glamour and loose Scandinavian minimalism. The couple’s latest project, their own apartment, is the most refined expression of their style to date.

With the windows open and neighbourhood chatter wafting in, Bauer Grung and Lopez Quincoces describe an ordinary evening at home. “I’ll be cooking—lately I’ve been making paella—and someone will be sitting on the counter drinking wine,” says Lopez Quincoces, referring to the canaletto walnut and black granite island they designed. He hadn’t cooked in almost 15 years because in other apartments the kitchens were too dark or separate from the dining areas. This place, on a quiet street in the city’s Chinatown, is different. The ceiling’s plaster mouldings are the only remnants of the walls the couple tore down to create a single roomy living area. “Now we have this space, it comes pretty naturally,” says Lopez Quincoces. “You want to cook and share; invite friends and have dinners.”

Depending on the company, conversations can be peppered with Spanish, English, Italian or French. Connecting the dots among every place Bauer Grung and Lopez Quincoces have lived, the lines would roughly intersect in their adopted city. Born in Paris to Norwegian parents, Bauer Grung was raised in Rome and educated in London. She arrived in Milan in 2012 to take a job at the design firm Lissoni & Partners, where she met Lopez Quincoces. Originally from Madrid, he studied interior architecture at the Politecnico di Milano, then joined Lissoni, where over 13 years he climbed from interior architect to partner.

“We can take a week to discuss whether an armrest should be white or ochre, but on the big picture things we have the same instinct.”— Fanny Bauer Grung

In 2008, while at Lissoni, Lopez Quincoces opened Quincoces-Dragó (the name combines his grandparents’ surnames). At first, it was just a nights-and-weekend project, but when Bauer Grung signed on, she soon took it full time, and Lopez Quincoces joined her in 2017. By now, the couple have designed countless projects together—homes from London to Rome, a private club in Tuscany and Dr. Smood cafes in New York and Miami. Their own home was the easiest. “We can take a week to discuss whether an armrest should be white or ochre, but on the big picture things we have the same instinct,” says Bauer Grung.

She says the gallery plays an important role in that process: “It’s like a laboratory for us.” A typical mise-en-scène will include vintage Scandinavian and Italian furniture, anonymous pieces picked up abroad, contemporary glass from up-and-coming artists and collections the couple have created together. (Lopez Quincoces also designs for brands like Living Divani, Salvatori and Acerbis.)

“Fanny’s design sense represents the essence of Scandinavian aesthetic, with pure and clean lines and a sense of harmony and order,” says Marie-Rose Kahane, the designer behind Yali Glass and a co-founder of Venice’s Le Stanze del Vetro exhibition space, who shows her work at Six and often accompanies Bauer Grung on research trips to the glassmaking factories of Murano, Italy. “When [her design sense] meets up with Milan, and the Italian tradition of design, something extraordinary comes out.”

In the couple’s apartment, the glamour of 1930s Milan, particularly the Villa Necchi Campiglio and its architect, Piero Portaluppi, was a major influence. “We wanted to have old-school moments—in between the Orient Express train or, like, a big old elevator,” Lopez Quincoces says. The home’s previous owner was an elderly woman who was selling off her vast portfolio of apartments and donating the proceeds to the Catholic Church. She was happy to get rid of what she considered a fixer-upper: a rundown, century-old walk-up. What the couple saw, instead, was a jewel in the rough: an untouched 1920s apartment in all its original splendor.

Many of the home’s furnishings—a pair of Gio Ponti armchairs, lamps Marcel Breuer designed for the 1925 Paris expo, a centuries-old Mauritanian rug, a pair of Ingo Maurer Uchiwa appliqué lamps—found their way there through the gallery or were repurposed from their previous apartment. The curved metal Piero Lissoni dining table, for example, was stripped of its matte-green paint, revealing a reflective raw steel. “We took it to a craftsman to remove the paint, but when it was returned it was still too dark,” Bauer Grung recalls of the process. “David is a perfectionist, so he stripped the rest of it by hand.”

They reshuffled the apartment’s original cloisterlike layout, while keeping its turn-of-the-century details, like herringbone parquet floors and art deco–inspired doorframes. “We needed the space for our growing family,” says Lopez Quincoces, referring to the arrival of their daughter, Uma, in 2019.

Where the hallway once ran, three vestibules—two closets and a central office space—now act as buffers between public and private zones. “There is no passage in the house that isn’t used for some purpose,” Bauer Grung says. Each vestibule is hewn from solid walnut and lacquered a glossy burnt umber. All along the office’s concave ceiling, fine strips of inlaid brass sketch geometric patterns in the grain—a complicated carpentry feat. The pair credit their studio’s decadelong relationships with artisans in the woodworking hub of Brianza for the expertise. “There is no machine that does that,” says Lopez Quincoces, describing how they rendered the softly rounded corners. “It was all made by hand.”

“I wanted a house full of detail,” Lopez Quincoces says, “small things Uma will remember when she grows up. I have similar memories of my childhood. I wanted her to have the same.” One thing he didn’t anticipate, though, was how much time they would spend inside. “The last piece of wood was put in four days before the first lockdown,” he says, of the renovation. “I never expected our wardrobe would become Uma’s playground,” recalls Bauer Grung.

Now they are eager to return to the gallery to play out ideas that have been percolating in their time away. For next year’s Salone del Mobile, they will launch their latest furniture and objects. “We’re excited to show some collections that we haven’t shown before,” Bauer Grung says. “When we design for ourselves, it’s always the best result.”