How Apple’s Newest Products Measure Up

How Apple’s Newest Products Measure Up

Apple aims its newest computer and display at creative professionals. 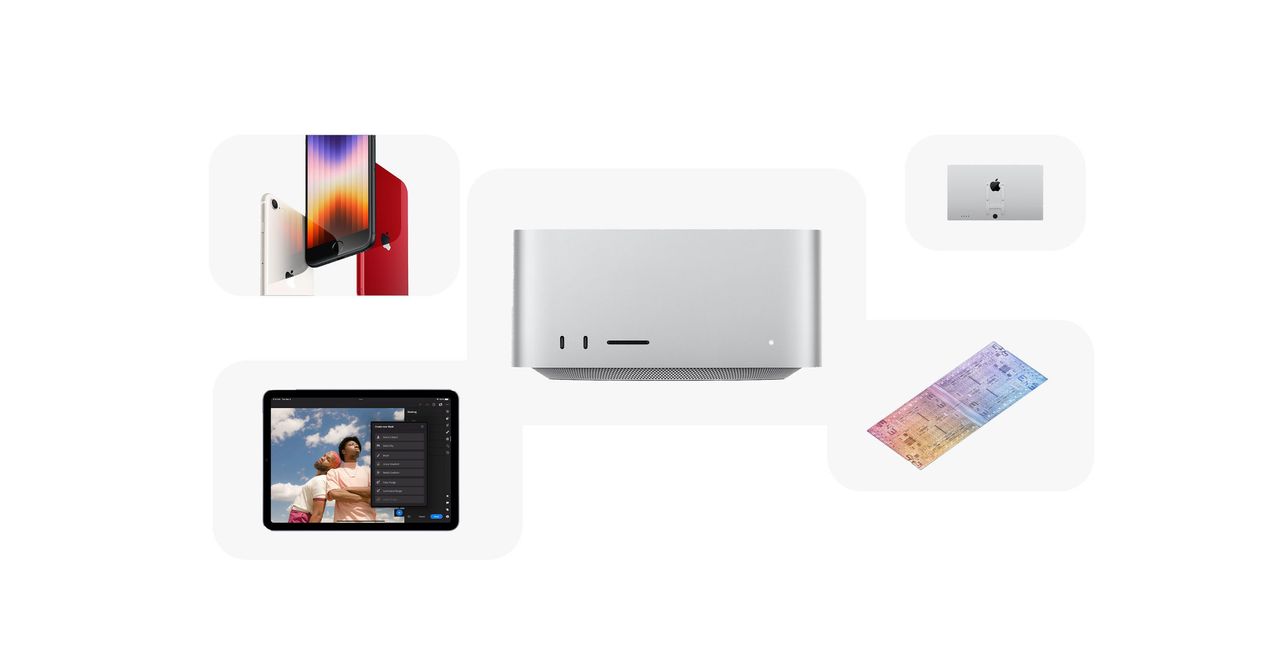 Upgrades to a popular iPhone and iPad, plus a brand-new Mac with matching monitor: Apple had a busy Tuesday, or at least a busy virtual event.

The focus of the news was speed. Apple is bringing fast 5G cellular connectivity to the new iPhone SE and the new iPad Air. Both of those devices and the all-new Mac Studio desktop computer have faster chips. And the company showed off the Studio Display, aimed at professionals, with a built-in camera and a whopping price starting at $2499.

All will hit stores on March 18.

Apple managed to tack on a few other announcements, including new green iPhone 13 options and the arrival of Major League Baseball to Apple TV+.

While most of the mainstream product updates are incremental, there are a few new features I’m excited about, such as the smart-camera-focusing Center Stage tech for the iPad Air. There are some things I’m disappointed Apple didn’t announce, like an SE with multiple cameras on the back.

To find out if this new hardware is worth the money—in some cases, products are pricier than their predecessors—I dived into the specs. Here’s what you need to know.

The iPhone SE line is, as my colleague Joanna Stern calls it, iPhones for people who don’t like new iPhones. The new SE looks just like the previous one, which itself is a copy of 2017’s iPhone 8. It does, however, have upgraded parts.

The third-generation iPhone SE starts at $719. The big new feature is 5G connectivity, which can provide blazing-fast speeds if you’re in the right spot. Just note: Apple only built in the slower, more widely available version of 5G, and not the superfast flavour available on pricier iPhones.

The new version has improved battery life, Apple said, because of its new A15 Bionic processor, the same in iPhone 13 models. But 5G is a big drain on power, so we’ll have to see how it holds up. (My advice? Keep 5G off unless you really need the speed.)

There’s also tougher glass in the front and back. There’s a better camera, too, though only a single rear camera. No wide-angle or telephoto for the budget phone. For just $70 more, you can get the iPhone 11 with Face ID, a larger screen and two rear cameras—but no 5G.

The iPhone SE is an entry-level phone for people who make value a priority, don’t use their smartphone all that much but want to stay with Apple, or just really like the home button.

The new $929 iPad Air looks virtually identical to its predecessor—Touch ID fingerprint-sensor in the power button, flat sides and a 10.9-inch display. Like the new SE, the cellular option now offers 5G connectivity.

Apple didn’t bump up the battery life from the previous Air either, promising as many as 10 hours of web surfing on Wi-Fi and nine hours on cellular.

Both cellular and Wi-Fi iPad Air models have a faster M1 processor, the same as in last year’s iPad Pro and Apple’s entry-level MacBooks. It powers new features such as Center Stage, which automatically pans and zooms to keep you in frame while video-chatting through the upgraded 12-megapixel ultrawide front-facing camera.

The storage options start at a disappointing 64 GB. There’s no Face ID. You’ll have to upgrade to the $1199 Pro for that. And unfortunately, the front-facing camera is still positioned on the short side of the iPad, which doesn’t fix the unflattering double-chin view.

The iPad Air is Apple’s Goldilocks option. It sits between the entry-level $929 basic iPad and the $1159 11-inch iPad Pro. (For people who want a smaller tablet, there’s just one option, the recently rebooted steno-notebook-size iPad Mini, which starts at $749.)

The iPad Air is best for someone who wants a tablet with a sizable screen to do cloud-based computing tasks or drawing. It’s compatible with the second-generation Apple Pencil ($129) and the Magic Keyboard with trackpad, as well as various USB-C accessories, such as external hard drives.

Two years ago, Apple said it was going to transition its computers from Intel chips to its own. The M1-powered MacBook Air and Pro models hit the market in late 2020, followed by the even more powerful M1 Pro and M1 Max-fueled MacBook Pros last year.

The new M1 Ultra chip is the latest Apple-designed processor. It holds the power of two M1 Max chips fused together (literally). This thing has 114 billion transistors, 20 CPU cores and 64 GPU cores—but that’s not important. What you need to know is that it’s faster, more powerful and aimed largely at professionals who use computer-intensive software for tasks such as 3-D rendering or 8K video editing.

Mac Studio, a desktop computer that looks like a Mac Mini that just ate another Mac Mini, is the first to include the new chip. It’s an all-aluminium box that’s 7.7 inches square and 3.7 inches high. (Accessories such as a monitor and keyboard aren’t included.) The Studio has a lot of ports on the back, including four USB-C/Thunderbolt 4 ports, two USB-A ports, an HDMI port, an Ethernet port and an audio jack. It also has two more USB-C ports on the front, as well as an SD card reader.

Apple will continue selling the 2019 Mac Pro for people who use Intel-based programs. It starts at $9,999.

Studio Display is a new stand-alone 27-inch monitor, starting at $2499, in an iMac-esque, all-aluminium enclosure. The 5K Retina display has 600nits of brightness. A 12-megapixel ultrawide camera on its front works with the auto-framing Center Stage feature, and there are six built-in speakers that support Apple’s surround-sound technology called Spatial Audio.

It’s not compatible with all Mac models, but it does support many going as far back as the 2016 MacBook Pro.