After a year of decorating to maximise comfort, homeowners happily spruce up their digs to entertain again. 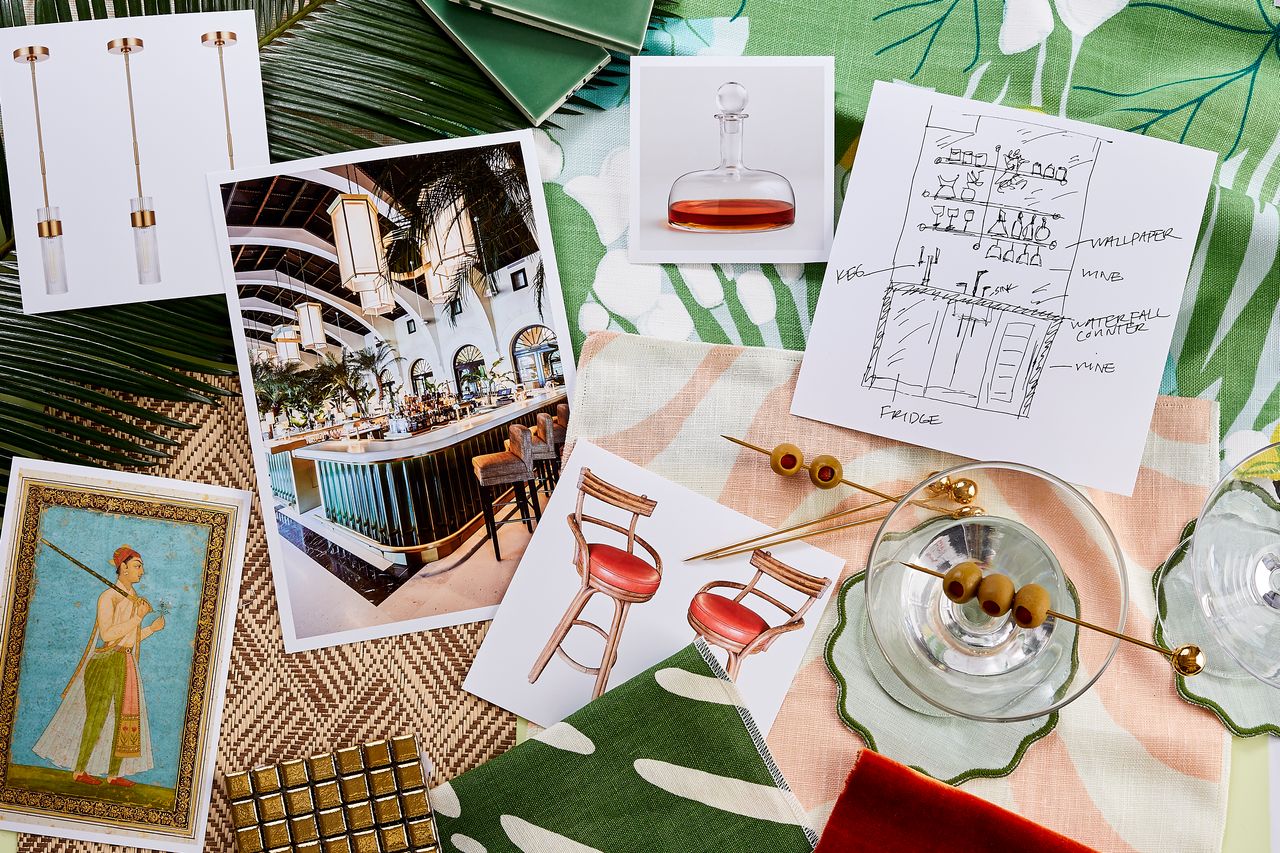 The bar is not a commercial establishment, though Kiki Dikmen, a logistics executive, would probably be thrilled to see you. With the help of interior designer Lucinda Loya, he built the bar in his Houston home. It has Mediterranean-blue walls, cloudy mirrors and smoke rings painted on the ceiling. The space was a pandemic labour of love that he recently unveiled to friends and family on his birthday.

“We gave everybody who came a gift—monogrammed masks that said ‘Booty’s’,” said Mr. Dikmen.

Just as the pandemic is winding down for most people in the United States, an end-demic is revving up. Interior designers, furniture showrooms and tableware retailers report that after months of isolation, clients and customers can’t wait to welcome family, friends, colleagues—hell, just about anyone—into their homes. “They feel as though they’ve walked through the fire and survived. They want to reward themselves for the sacrifices and, in many cases, profound losses that they’ve experienced over the last year and a half,” said Palm Beach designer Jim Dove.

With gregarious abandon, homeowners are upgrading décor with a “you only live once” verve that some designers say is unprecedented. Hermès-orange vanities. Gold-striped ceilings.

Sean Anderson, an interior designer in Memphis, Tenn., senses a déjà vu: “I keep hearing people refer to the months and years ahead as the Roaring Twenties, and that is absolutely reflected in some choices that are being made right now.”

The Rug Company has seen a 46% increase in online visits to its “Bright Rug” category, a spokesman said. Among those eye-popping carpets: swirling rainbows and blown-out florals by fashion designers Paul Smith and Mary Katrantzou, respectively. Resource Furniture has seen a noticeable uptick in demand for wall beds that convert home offices into guest rooms. At online furniture seller France & Son, sales of extension dining tables and stacking chairs have increased 40% year over year, said owner Kevin Wu. “We’re getting a lot of calls from people who say they need things delivered in time for a holiday. Memorial Day was just crazy.”

As we say goodbye to social distancing and hello to socializing, folks who had already dolled up their outdoor spaces—because that was the only safe place to get together—are now laying plans to welcome guests into the house. Here’s a room-by-room rundown of the joyful upgrades homeowners have in store for their visitors.

Chicago firm KBS Interiors is kitting out a dining room for a family that had decamped to the suburbs but who, as vaccinations began rolling out, wanted to make the room “a splashy, lively space to make up for lost time,” said Ana Nardi, co-founder of KBS. Plans include sculptural velvet chairs and a gnarly-chic sideboard made of live-edge wood. “They want their homes to feel more like the hotels and restaurants they missed going to.”

Many suddenly social homeowners want to break bread with as big a crowd as they can shoehorn—stylishly—into their homes. Interior designer Cara Fox in Salt Lake City said clients are requesting extra dining room chairs to accommodate hordes. To seat more guests, Greensboro, N.C., couple David and Rachel Lezcano recently bought a vintage midcentury Heywood-Wakefield dining table that expands—it came with two leaves—to seat up to 10 guests. The Lezcanos, who this week hosted their first dinner party in more than a year, seated six with the use of one leaf. “We’re so excited to have people come into our house again and make it feel alive,” he said.

“We are seeing a huge increase in sales of entertaining and tableware pieces, specifically in very large sets of glasses and plates,” said Noel Fahden, vice president of merchandising at online vintage retail site Chairish. Cocktail napkins are flying off the shelves, as are taper candles, “which is interesting, because typically we would see taper candle sales peak in the fall when there’s less daylight—not around the longest day of the year!” said Ms. Fahden.

And though glassware and candlesticks conjure thoughts of meticulous place settings, Dana Wolter, a designer in Mountain Brook, Ala., sees clients having fun with china patterns and textiles. “It’s formal entertaining but with a more organic and casual flair,” she said.

An earthy bestseller at tableware maker Haand in Burlington, N.C., is the brown Burl collection, which has “flecks of golden colour swirled” into the surface of each porcelain plate, said Haand co-founder Mark Warren. “One of our largest recent orders was 56 pieces, which the customer had mailed to a vacation house,” said Mr. Warren.

That customer happened to be Bob Pittman, creator of MTV Networks and a former chairman of AOL.

Reached by phone, Mr. Pittman described how he was recently overtaken by a strong and unusual desire to elevate his dinnerware. “If you had asked me about my dishes two years ago when I was rushing in and out of the house, I would have said I literally haven’t thought about it in 20 years,” he said. “But during quarantine, I realized I’d let a lot of stuff go to hell and I needed to upgrade. So I bought one piece, and then it became an addiction,” said Mr. Pittman. “Now I’ve got cabinets filled with it.”

Floral arrangements, too, are busting loose. “The formal centrepiece is a thing of the past,” said interior designer Heidi Caillier of Seattle. “Now people are jamming together just-picked wildflowers, poppies and peonies that they grew in their quarantine gardens.”

In anticipation of company post-lockdown, Portland, Maine, resident Candace Karu sold her condo a few months ago and upsized to a 1920s Dutch Colonial that has a spacious spare bedroom. Of course, with travel restrictions then in place, Ms. Karu had no idea when she’d actually be able to have her first sleepover.

“I have far-flung friends and was just hoping they would eventually be able to come and stay,” she said.

In an act of hope, she asked her daughter, interior designer Tyler Karu, to transform the guest bedroom into “the most beautiful room of the house.”

They chose luminous green paint for the walls. “It looks like a colour Vermeer would have used,” Candace Karu said, “and there’s a little corner with a comfy chair, and the bed sits very high so it has a beautiful view of the Portland skyline.” The window shade is a boldly striped fabric by local textiles artist Kels Haley, who created the design in homage to the costumes of 1920s flappers who were “dripping in pearls and wearing elaborate headdresses.”

Operation Houseguest officially got under way after travel restrictions ended in May. “I’ve got a full schedule pencilled in for the rest of the summer,” Ms. Karu said.

Two homeowners also transformed formerly humble kitchens into spaces fit for company. “We just did a kitchen island that seats eight to 10 people,” said Ms. Nardi of Chicago’s KBS. “We put in a very deep kitchen sink, so guests won’t see the mess.”

In Atlanta, homeowner Jaya Krishnaswami last month upgraded her kitchen with a new pantry with sliding storage shelves and cubbies, designed by California Closets. “We’re having a lot of family coming to visit and I wanted to be organized,” she said. This month Ms. Krishnaswami is hosting 10 relatives who are flying in for a family reunion.

Not all revellers who desire a domestic watering hole are turning to A-list designers to execute their dreams, à la Mr. Dikmen. Some find accoutrements themselves from sources like 1stDibs, a spokeswoman for whom said the site has seen a noticeable increase in demand for bar carts, dry bars, wine coolers and barware in the last three months.

After moving in May to a new apartment in Ontario, Calif., homewares stylist Miranda Rose Farmer created a serve-your-own bar nook in her dining room. Anchoring the alcove is a console table with three shelves floating above. “The aha moment was when I got a Lazy-susan tray for wine bottles. People can just spin it to whatever bottle they want,” she said. She stocked the nook with pale pink wine glasses, a cut-glass cocktail shaker with a rose-gold metal cap and green shot glasses. “I love the decadence of having people over again and I wouldn’t want to spoil that feeling by serving them drinks in plastic Solo cups.”