Let’s Redesign The Laptop For A Work-From-Home Era

Let’s Redesign The Laptop For A Work-From-Home Era 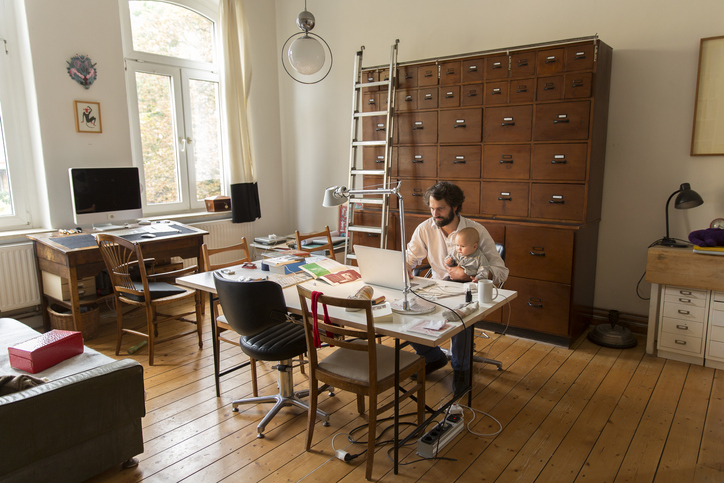 With remote work by and large here to stay, a lot of focus has turned toward the key work-from-home technology tool: the laptop. But relying so heavily on the laptop has raised all sorts of issues—from camera and sound quality to security and privacy.

1. Improve the way we look on camera…

There’s already software to edit the view of the pupil of your eye so it looks like you’re focused on the camera. It’s not a big leap to think software will scan our faces and present a virtual camera view that shows us at our most flattering angle with a little motion thrown in for realism.

Going a step further, more workers who are in continuous meetings don’t want to stare into a camera or at a single screen all day. Having more than one camera—think a production studio for the home office—could enable meeting software to smoothly switch automatically from one camera to another depending on where you focus your eyes.

We should also see an evolution of tablet and laptop design to improve the way we look on camera. If you have a device with a detachable keyboard, you can already position your screen and its camera on a stand to get a better angle. Separating the laptop camera so you can put it anywhere is a logical step.

You already have another camera: your smartphone. With the right app, you can send smartphone-camera video to your computer, and, jumping through a hoop or two, get that video into a meeting. This could be more plug-and-play in the future, making the camera on your mobile device just another peripheral that you can put wherever you like for your computer to use.

Cameras under the screen are coming in smartphone design. That will make its way to laptops. We’ll look our colleagues right in the eye on screen and we won’t need to make any special effort.

Perhaps the least-expensive and biggest-impact upgrade to current speaking/hearing systems on laptops would be better microphones. Not only does everyone on conferences sound echo-y and tinny, but it is hard to understand the words sometimes.

And, just as important, it can be difficult to hear those small sounds that signal approval, such as uh-huh; confusion, such as hmm; or when someone wants to speak, such as ah or mmm. The inability to hear these small signalling sounds makes conversations more stressful and less effective.

Real-time, artificial-intelligence analysis of conversations can solve this problem, providing additional cues that help people have more meaningful conversations. This really works and is available today.

In addition, research shows that the audio quality is just as important as video quality when judging the overall “quality” and “presence” of the conference experience. While microphone quality is most important to the audio experience, speaker quality is also a big factor. With additional speakers, one could have small group meetings that were much closer to the “natural” experience of in-person meetings. They would be so much less stressful and more effective.

For most people the main form of connectivity for their laptop is wireless. Various forms of wireless connectivity are being substantially improved. The latest generation of Wi-Fi (Wi-Fi 6) hit the market in 2019. It offers increased speed, lower latency and the ability to more effectively share Wi-Fi spectrum with the ever-increasing number of connected devices in homes.

More recently, Wi-Fi 6E products have been announced that will use new spectrum at 6 GHz that the Federal Communications Commission recently made available for unlicensed access. This represents the biggest increase in spectrum for Wi-Fi in 20 years.

Looking forward, work has already begun on Wi-Fi 7. Each of these brings further performance improvements in speed and latency. In parallel, the rise of 5G cellular is enabling similar improvements for laptops equipped with 5G modems, with the added benefit of being able to easily connect when users venture out of their homes.

The improvements in Wi-Fi and 5G can enable laptops to support higher-quality videoconferencing and augmented-reality/virtual-reality applications. They will also allow users to unload much of their memory and computing into the cloud, resulting in thinner and lighter laptops with longer battery lives.

Screen sizes of individual devices are unlikely to get bigger, but the total amount of screen real estate will increase. People will prefer using multiple monitors for better multitasking—to access other applications while videoconferencing, for example.

People will benefit from software that can flexibly migrate their work across multiple screens, ranging from situated workstations to laptop computers to mobile devices. For instance, people might want to move their meeting to a different device to enable a walk outside or a move to the kitchen.

If there is a strong demand for working outside, software interfaces will have to become more adaptive, adjusting contrast and brightness.

We will need longer-lasting batteries to power brighter screens. And computer processors and operating systems need to be smarter to allocate resources from elsewhere if maximizing screen brightness is a higher priority. We might even see alternate display technologies (such as head-mounted retinal displays) that can avoid the impact of outdoor light.

All sorts of audio issues arise with work-from-home use of laptops. Roommates quarrelling, pets barking or just the hum of the city have been hard to suppress while laptop users are in video or audioconferences. However, help is on its way.

Algorithms on laptops will soon be able to separate out background noises, and do so fast enough that the disturbances get continuously filtered out before leaving the laptop. The same can be done at the receiver’s end: If Bob’s laptop cannot filter out its own background noise, his counterpart Alice could run the filtering, so her laptop speakers only play Bob’s clear voice.

Of course, random background noises are harder to eliminate than steady, familiar noises. But these filtering algorithms can retrain themselves to become better gatekeepers the next time around.

Peering further down the audio road, it might even be possible for laptops to create sound bubbles around the user’s head. This means the laptop speakers would radiate the sound in a way that’s clearly audible around a user’s ears, while ensuring near silence close by, say where the user’s roommate is reading.

Virtual backgrounds are on their way to being a necessary part of the online meeting experience.

As a host, dynamic background images can go a long way in differentiating your 10 a.m. Zoom meeting from the 3:30 p.m. meeting. Likewise, as a meeting attendee, you can make your contributions more memorable by either removing the distractions of your living room or by using a background that might complement the subject matter or time of day of the meeting.

Good lighting and a laptop camera that can place you in front of an abstract design or tropical background without looking like you were cut out and pasted in with a pair of safety scissors will aid in making virtual meetings feel more professional.

7. Security inside and outside the laptop

Working from home creates a number of security concerns for companies, which will lead to enhancements for laptops that you can and can’t see.

As for those that are visible, we’ve already started to see laptops adopting new fingerprint recognition to unlock a device. Similarly, laptop manufacturers may adopt facial recognition or other biometric unlocking software similar to what we have grown accustomed to on cellphones.

Beyond the device itself, we may see a rise in personal and corporate virtual private networks and multifactor authentication. In addition, companies may focus on post-quantum security, leveraging cryptographic algorithms in their systems.

Laptops are coming with various hardware and software to track them if they are lost or stolen.

The most obvious method is GPS tracking of laptops. There are software tools available with all popular laptop operating systems that use GPS to find the device. Still, GPS tracking can be disabled, and its effectiveness can be compromised indoors.

The second line of defense is radio frequency identification tags. The low-cost RFID tags put on machines in retail stores don’t work well, due to the presence of significant amounts of metal in laptops. To ensure high read rates at a distance, metal mount tags can be placed on the laptop. Then a corporation can use its existing RFID-based tracking system to keep tabs on its laptops.

One issue with the surge in tracking is whether the user’s privacy will be breached. There’s the perennial dilemma between privacy and utility. It will be essential for lawmakers to roll out legal guidance as to how such ubiquitous tracking information can be used by law enforcement in cases involving private citizens.

9. Keeping the laptop safe (from kids and others)

Individuals and companies are focusing on how to protect work laptops now that they are being used more often from the home. There are a number of basic security hygiene rules that can be put in place to protect a device.

These include screen-lock timers, so kids can’t access a device when the employee has left the room; limiting administrative-level privileges to the general workforce, so others can’t download inappropriate products onto a device; and using complex passwords or multifactor authentication to provide foundational defence against misuse by casual threats, such as family members, friends or domestic workers.

Meanwhile, security-conscious organizations are placing added security tools and layered encryption onto devices to protect them not only from family members, but also nation-state actors and the common thief. These tools can limit unauthorized user behaviour, such as plugging in removable media devices or using Wi-Fi at a local coffee shop.

Organizations also might deploy a heartbeat security model. That’s when devices have an authorized amount of time they are allowed to work outside organization-owned buildings or off the enterprise network. In addition, laptops can be equipped with advanced security software that takes defensive actions, such as powering off devices to wipe clean the entire hard drive if the device doesn’t check in within the approved intervals.