MyTheresa Is E-Commerce for Luxury. The Stock Might Be the Cheapest Thing It Sells.

MyTheresa Is E-Commerce for Luxury. The Stock Might Be the Cheapest Thing It Sells.

Mytheresa, based in Munich, went public in the U.S. in late January, raising about US$350 million for the company. 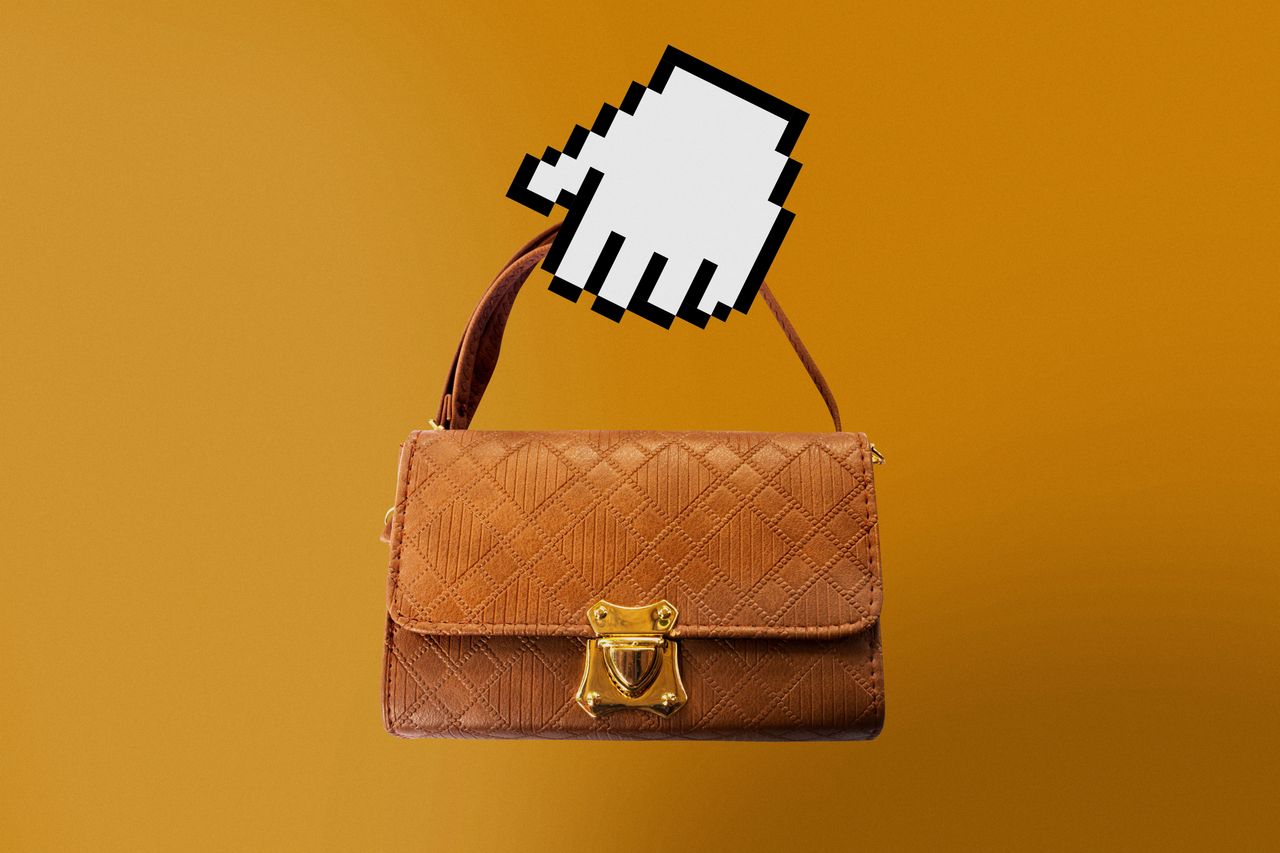 Bricks-and-mortar fashion boutiques have been in a tough spot during the pandemic. Small stores, after all, aren’t set up for social distance. Online retailer Mytheresa has been able to fill the void. The website caters to wealthy shoppers looking for help in finding their next designer handbag, pair of shoes, clothing item, or accessory.

Mytheresa, based in Munich, went public in the U.S. in late January, raising about US$350 million for the company. The listing grew out of the bankruptcy of Neiman Marcus, which purchased Mytheresa in 2014. The small-cap has a market value of about $2.2 billion.

Mytheresa stock (ticker: MYTE)—technically an American depositary share of parent company MYT Netherlands Parent—was recently trading just below its $26 initial-public-offering price after having jumped to $36 shortly after the debut. The stock could recover those losses and more in the coming months.

“They are at the intersection of two higher-than-average growth trends in retail: luxury and e-commerce,” says J.P. Morgan analyst Matthew Boss.

Luxury buyers have been slower to adopt e-commerce. Before the Covid-19 pandemic, some 12% of global luxury sales happened online, compared with a 20% share of overall retail. The gap is closing. A recent study by consultancy Bain estimates that the share of luxury goods sold online could nearly triple to more than 30% by 2025.

Meanwhile, the overall luxury market is growing by about 7% annually.

The tailwinds put Mytheresa in an enviable position, and the company should get a further boost from its expansion in the U.S. and China, which are currently just 10% of sales each. (Europe was 60% in its latest fiscal year.) The company now has collections for men and kids, and it could expand into categories like jewellery and furniture in the future. 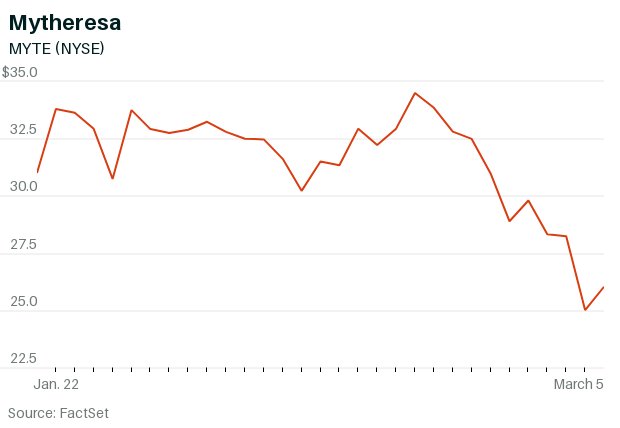 Mytheresa isn’t your typical money-losing tech start-up. The company, which reports in euros, earned €6.4 million ($9.9 million) in its latest fiscal year on €449 million in revenue.

Sales have grown an average of 22% over the past two fiscal years, while adjusted earnings before interest, taxes, depreciation, and amortization, or Ebitda, have grown at a 30% clip. For the fiscal year that ends in June, analysts are forecasting revenue growth of 25%, to €560 million. Analysts, who track adjusted earnings, expect the company to make €30.4 million this year, up about 60% from the adjusted figure last year.

“We are dealing with high-net-worth individuals who like to spend money—that’s a great customer base, and our core asset is this customer,” says Mytheresa CEO Michael Kliger.

The customer focus has helped the company earn a consistent profit, with a gross profit margin of about 45% and an adjusted Ebitda margin of about 8%. Other e-commerce players at Mytheresa’s early stage of growth have been years away from turning a profit.

If Amazon.com is the “Everything Store,” Mytheresa has taken the opposite approach. The site carries about 200 brands, fewer than luxury e-commerce rivals Farfetch (FTCH) or Richemont’s (CFRUY) Net-a-Porter. A recent search for “black dress” on Mytheresa’s U.S. site yielded just over 2,000 results, versus more than 7,000 at Farfetch.

Mytheresa’s most loyal shoppers get access to personal shoppers, styling and concierge services, and other perks like invitations to exclusive designer events and parties. 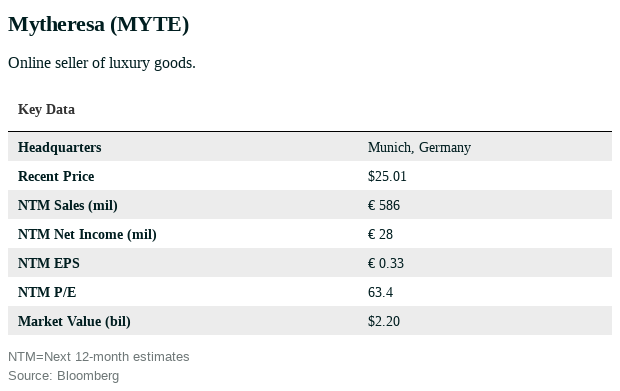 CEO Kliger says there’s a fine balance between presenting products in a way that’s helpful to shoppers and overwhelming them with an endless assortment. His company is focused on curation and more-abstract shopping desires, he tells Barron’s.

Customers looking for a specific Burberry coat, Chloé handbag, or pair of Gucci sneakers are better served buying directly from the designer.

Mytheresa’s website and app, now set up for spring and summer, are currently promoting multibrand compilations including “sandal season” and “talking-point pieces.”

The unique edit, to use the fashion-industry parlance, stands out to customers. Some 90% of Mytheresa customers surveyed by Cowen analyst Oliver Chen said they were likely to recommend the site to a friend, and 75% of them browse it weekly. Nearly 50% of Mytheresa’s customers spend at least $30,000 on luxury goods annually, the survey found.

Investors have been far more stingy when it comes to Mytheresa stock. The shares trade for 2.8 times this year’s estimated sales, versus 8.2 times for Farfetch and 4.5 times for The RealReal (REAL)—both of which are losing money.

Mytheresa could rally as investors reconsider that valuation gap. J.P. Morgan’s Boss has a price target of $38 on the stock, 50% above its recent close.

For now, Mytheresa stock is a luxury play at a bargain price. The sale is unlikely to last.