NFT Art Exists Digitally. Collectors Want To Put Them On The Wall

NFT Art Exists Digitally. Collectors Want To Put Them On The Wall

Storing art on a hard drive isn’t doing it anymore for collectors. 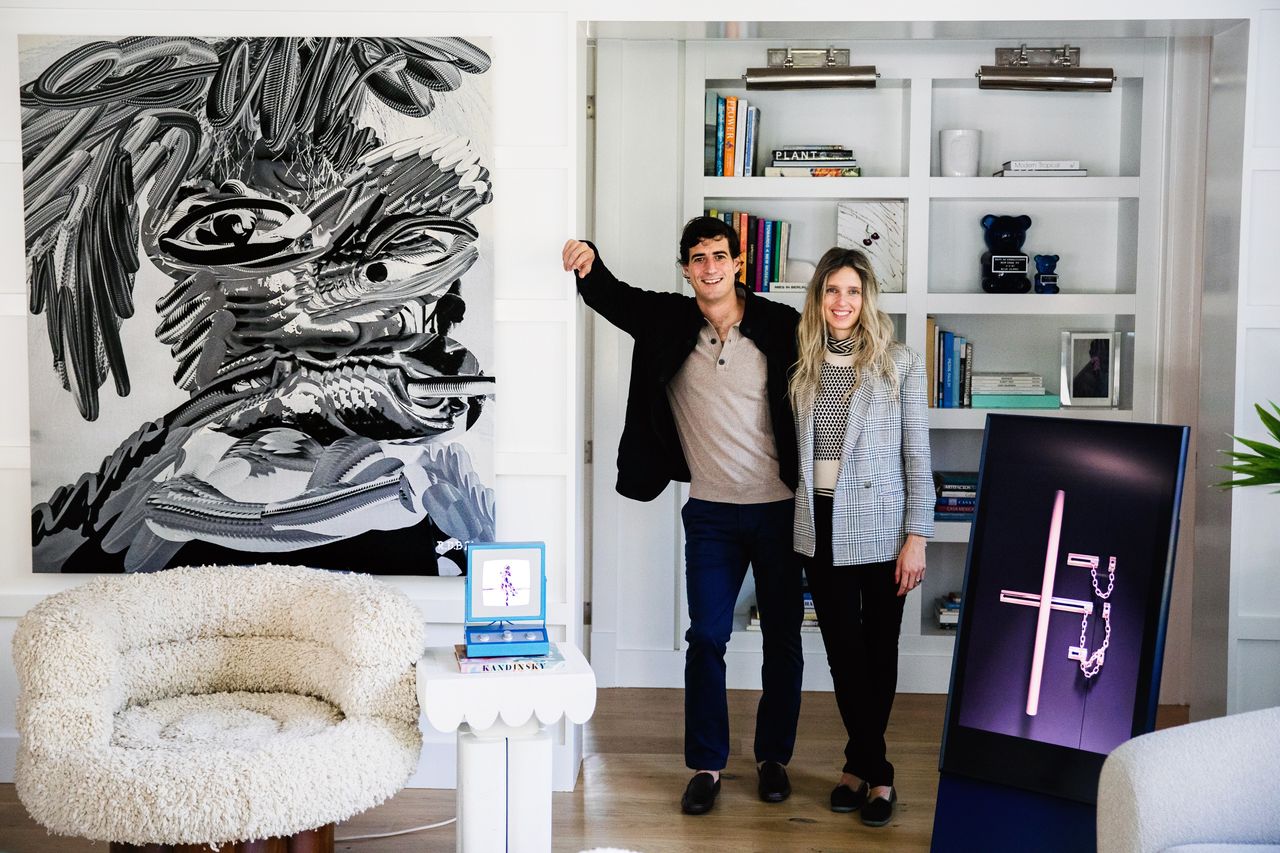 Art collectors and cryptocurrency investors went wild last year buying art that exists only in the digital world. Now, Desiree Casoni, a collector in Key Biscayne, Fla., is trying to figure out how to hang all her new purchases on the wall.

Ms. Casoni owns more than 500 digital artworks with her investor husband, Pablo Rodriguez-Fraile. Bored of swiping through their collection on a cellphone or laptop, the couple initially retooled a few television sets throughout their home, but that meant downloading files onto thumb drives and plugging them in. Ms. Casoni said they next dabbled with digital picture frames designed to run looping slideshows of family photographs, but said some of these models didn’t allow them to resize or crop images.

“I don’t want to look like we live in Best Buy, with chunky black screens all over,” said Ms. Casoni.

The couple even experimented by setting a projector on a plinth in a corner of their living room and pointing it at a blank canvas hanging on a facing wall. When they turn the projector off, digital pieces such as “Elephant Dreams II,” a surrealist pink landscape by Andrés Reisinger and RAC, disappear. When it does, the white canvas alone “looks minimalist,” she said.

Collectors spent $21 billion trading digital art and collectibles last year, up from $67 million in 2020, according to digital-analytics firm DappRadar. Most of these digital artworks were attached to NFTs, or nonfungible tokens, which act as vouchers of authenticity on the blockchain for virtual goods, such as digital art.

As it turns out, those adventurous enough to buy the most cutting-edge digital media still crave some kind of real-world way to show it off at home.

Collectors say they want their physical frames and displays to match the “wow” factor of their digital art. Stephen Zautke, an investor building a house in Puerto Rico, said he plans to blanket a wall in the entry of his new home with a 6-foot-square, micro-LED screen. It is specifically designed to show highly detailed images—in his case, Refik Anadol’s digital 3-D tank of sloshing colors, “Quantum Memories Probability.”

Art adviser Yvonne Force Villareal recently advocated the same wall-size screen idea on her Instagram account, posting a video extolling the vast screen in the studio of her artist husband Leo Villareal, who just released a series of NFTs.

Steven Sacks, who runs New York’s bitforms gallery, said he has been inundated with calls from collectors seeking to frame digital works. Mr. Sacks said he tells them it is possible to get an 8-foot-wide television screen for around $14,000, though custom jobs by digital signage companies can top $150,000. He said he doesn’t recommend converting ordinary TVs that might cost a couple hundred bucks into art displays because it diminishes how the artwork is perceived.

“You shouldn’t want to turn on the football game after you click off your $100,000 artwork,” he said. “That does a disservice to the art.”

So is keeping your NFT collection locked on your cellphone, says Aaron Cunningham, a Berlin-based developer who is selling framed spots within his digital museum, Musee Dezentral, where people can exhibit their digital art. “It’s one thing to look at it on your phone, but great art needs to be elevated beyond the swipe and like,” Mr. Cunningham said.

One startup, Framed, is selling NFTs that mimic ornate picture frames. They are formatted to attach to other digital artworks so that the pair can be posted together. Tokenframe, meanwhile, lets collectors upload their NFTs directly to its physical frames. “At this point, the world is so inundated with NFTs—how can you differentiate yours to signal its worth?” said Sven Palys, Framed’s founder.

Major collectors and artists say the answer, perhaps ironically, is to go for an even more analog look. In another area of Ms. Casoni’s Florida living room sits a blue device by Swedish designer Love Hulten that evokes a vintage arcade game, only the screen shows a video-sound piece called “I Miss You” by the artists Vini Naso and Yambo. The image depicts a floating couple in an embrace, and people can turn the device’s knobs to zoom in or out.

Mr. Hulten and artist Lirona collaborated on “synth#boi,” a limestone piece whose round screen is attached to a synthesizer keyboard. Press the keys, and portions of a cheery robot face illuminate the screen. Mr. Hulten said he designed his display “in symbiosis with her art piece.” The edition of 10 quickly sold out at roughly $65,000 apiece.

Mike Winkelmann, who goes by Beeple, is another artist known for teaming with a partner to build displays for his tokenized art. In the past, he enlisted New York-based Infinite Objects to encase his work permanently within sheets of clear acrylic, objects the company calls video prints. Infinite Objects said it has shipped more than 50,000 units by him and other artists since it launched two years ago.

Recently, when Mr. Winkelmann wanted to go bigger to create his first sculpture, “HUMAN ONE,” the artist used mahogany to build a boxlike structure around a quartet of LG TV screens, which he positioned vertically. The revolving result ended up looking something similar to a phone booth, but with screens projecting a video of a man in a space suit walking in a loop. (Infinite Objects said it recently launched its own line of larger screens.)

Ryan Zurrer, a digital-art collector based in Zug, Switzerland, paid $28.9 million for “HUMAN ONE,” but he hasn’t had it shipped home yet. He already has another 80 NFT artworks but displays only a handful at home. He cites environmental reasons for not running screens all the time.

Mr. Zurrer keeps eight pieces by Mad Dog Jones, Mr. Anadol and Beeple lined up on a shelf behind his desk in his home office. To be able to turn them all on with the flip of a light switch, he had to sync them using a hidden “bucket of wires.”

The rest of his home? It remains NFT-free, he says, “until my wife finds one she likes enough to live with.”