At the Core of This Glassy Holiday Home: an Actual Apple Tree

At the Core of This Glassy Holiday Home: an Actual Apple Tree

Architect Maxime Frappier has designed a series of modern houses, including one for himself with a tree growing out of its courtyard. 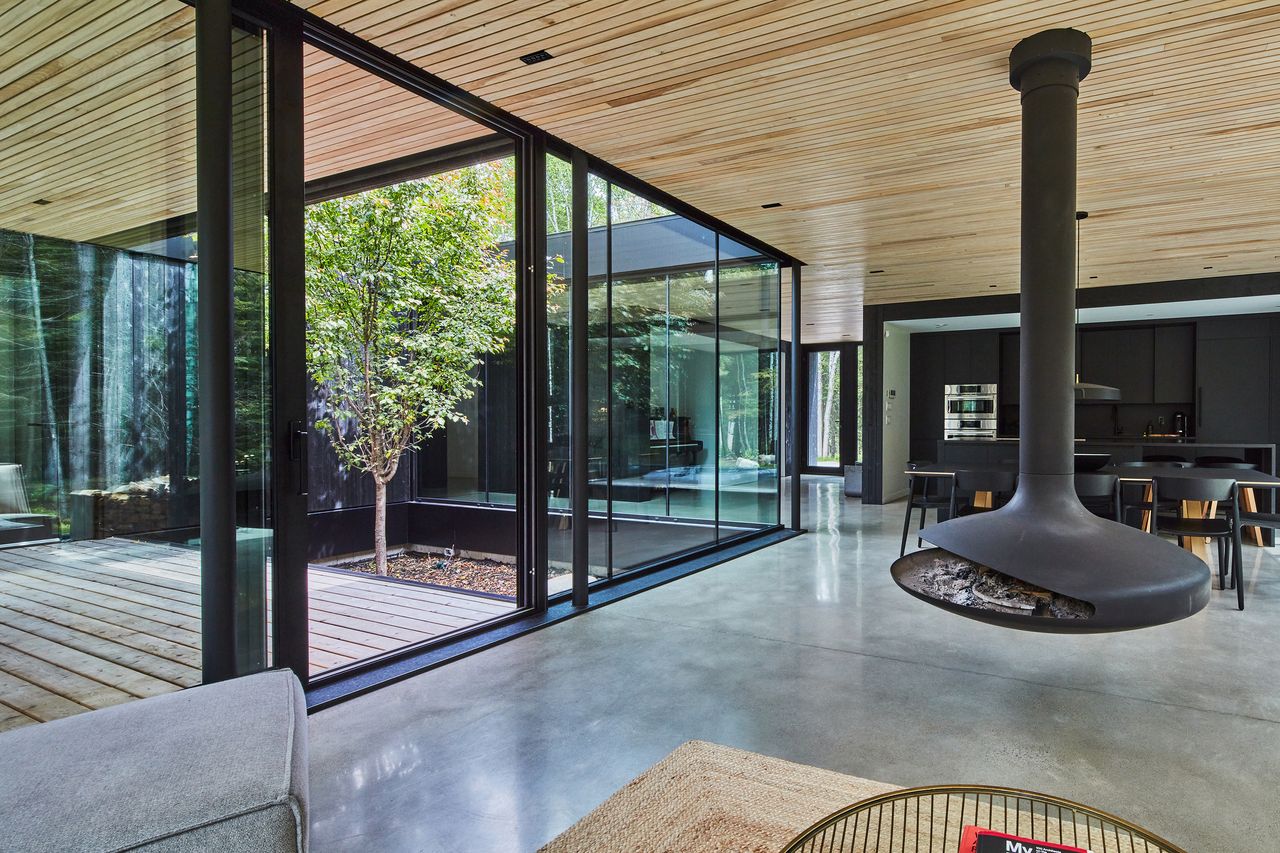 One of Maxime Frappier’s early designs for his dream holiday house in Saint-Donat, a small town 136kms north of Montreal, was completely round, like a hockey puck. A model shows it spiralling in a circle, looking somewhat like an Apple store version of a white spaceship.

“It was the best house I’ve ever drawn,” says Mr. Frappier, 45, a principal in Montreal-based architectural firm ACDF.

His wife, Marie-Andrée Lahaie, 45, a psychologist, pointed out the impracticalities. It would be difficult to put furniture in a house with curved concrete walls. The cost to build it would be too high, she said.

“It was not well received,” says Mr. Frappier “So I changed strategies.”

The finished house is still decidedly modern—almost transparent with glass walls, a flat roof and a minimalist aesthetic. But he squared off the curves, resulting in a series of boxes and a rectangular central courtyard.

The focal point is an apple tree, planted in a courtyard and visible on all sides through glass walls. The tree is a nod to the apple orchard where he spent summers as a child, creating houses out of empty apple crates in the centre courtyard with his siblings. Eventually, the apple tree will grow through the opening above and shade the house. 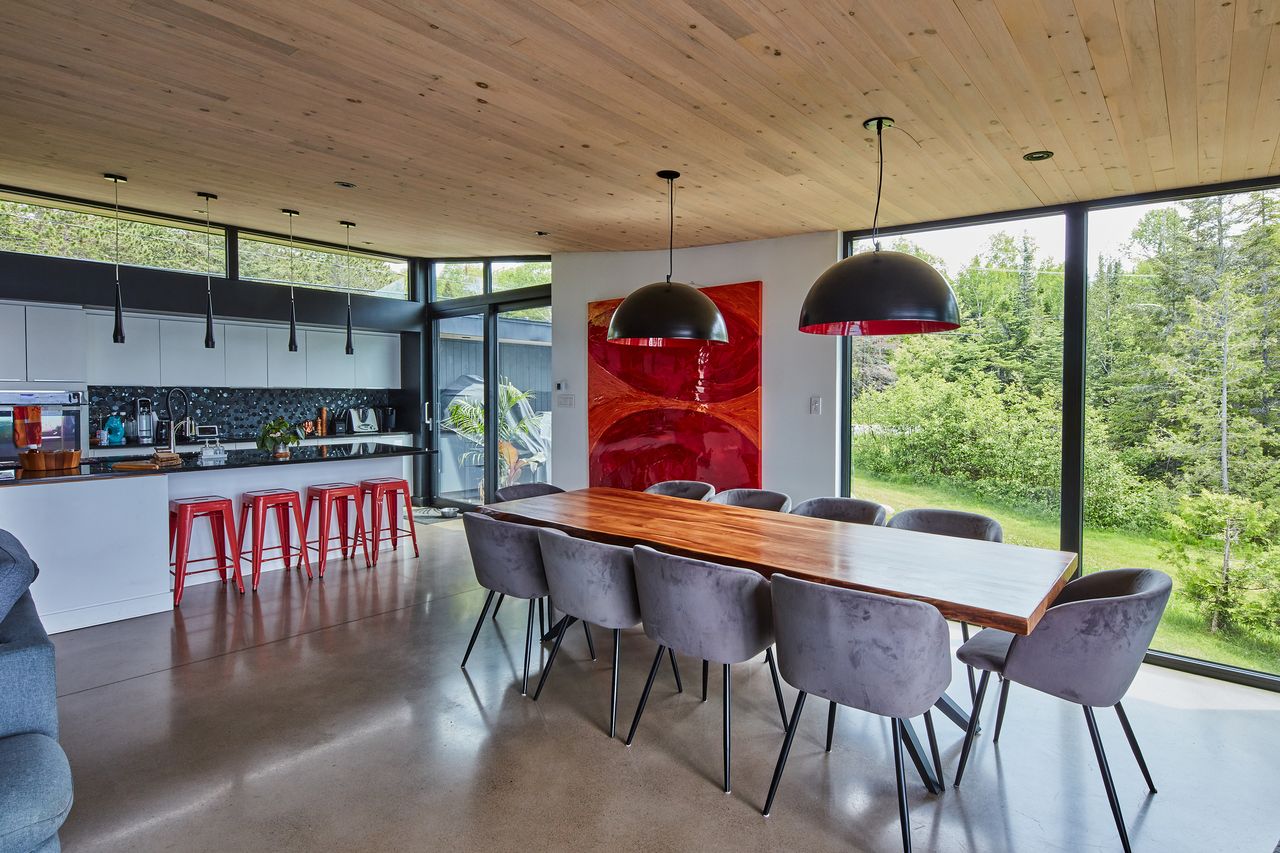 The main living area of the house, with the kitchen and living room, is transparent and made of glass. Sitting in the media room, looking at it across the courtyard, gives the impression of watching a play. Mr. Frappier intentionally made it so that someone walking out from the more private bedroom boxes of the house can see from afar what’s happening in the kitchen, allowing what he calls a gradual transition from being alone to being together.

The colour scheme is black and white, with black counters, cabinets and door frames set against the stained white pine on the ceilings. The floors are grey concrete and the cedar on the exterior is stained black.

Despite its lack of curves, Mr. Frappier says he is happy with the final design. “Limitations catalyze new ideas,” he says.

Finding a balance between creativity and practicality, or, as Mr. Frappier puts it, “European flamboyance and North American pragmatism,” is what dominates his growing body of work. ACDF has won many prestigious awards for its portfolio of hotels, office and residential buildings and arts centres across North America and Asia.

Though his ultimate goal is to design an iconic building somewhere like New York or Chicago, a no-holds-barred commission, Mr. Frappier says he knows that the real achievement is to come up with ideas and fresh insights for every project he does. The challenge is to infuse imagination and emotion in a manner that meets the demands of the site, budget and clients needs, he says. 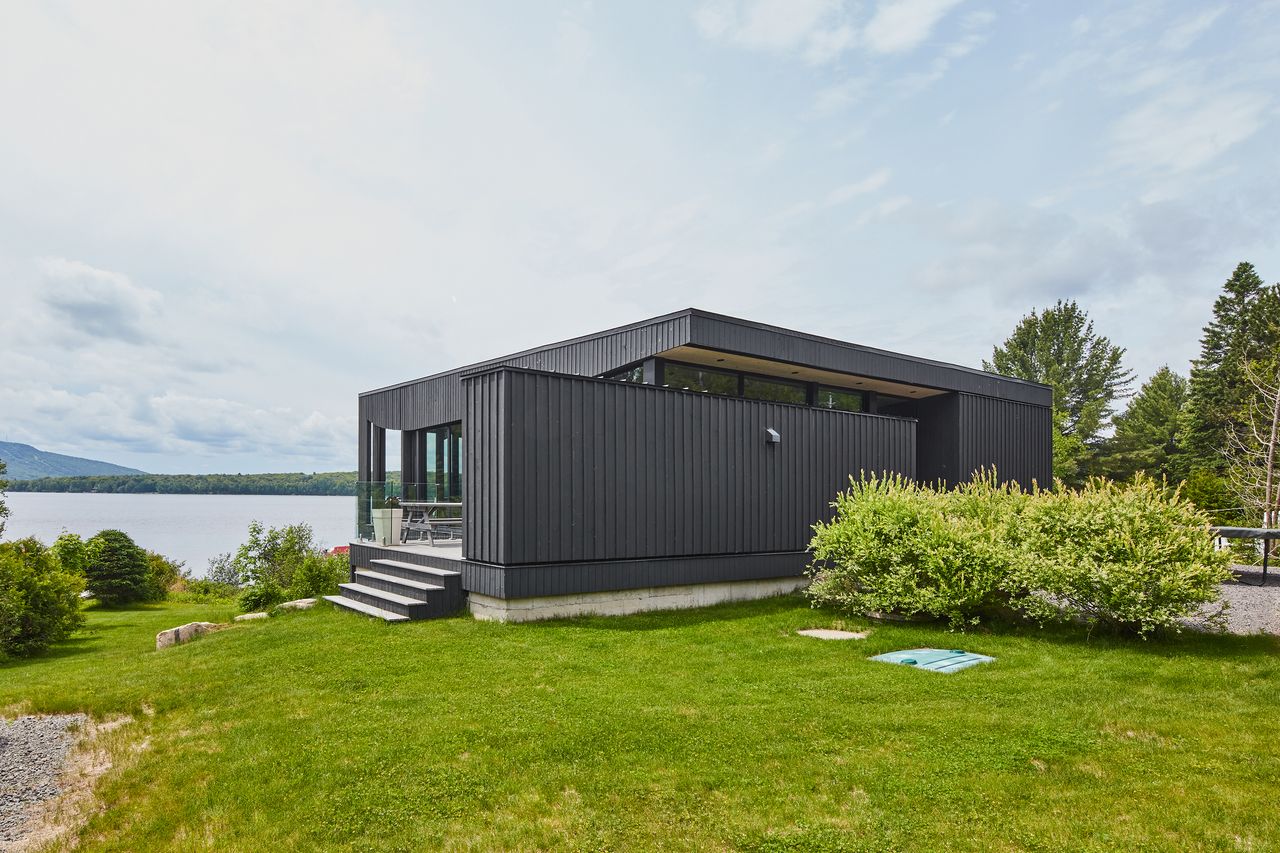 This duality of creativity and constraint is illustrated in a series of single-family homes he has designed in the lake- and mountain-filled region of northern Quebec. His clients say that even though they were aware of Mr. Frappier’s modern aesthetic, they were still surprised—one used the word “shocked”—by the first designs he presented to them.

“What he came up with was not at all what I asked for,” says Stephanie Daignault, 49, who hired Mr. Frappier to design a new 929sqm holiday cottage for her family of four, estimated to cost around US$5.44 million, currently under construction along the shores of Lake Archambault in Saint-Donat.

Ms. Daignault requested a traditional, Western-style house with a sloped roof. What she is getting is a “modern reinterpretation,” says Mr. Frappier, with enormous glass windows and a massive flat roof, part of which cantilevers over the back patio.

Still, Ms. Daignault says she loves it because it represents the fundamentals of her request, with the warmth she was seeking with lots of wood and stone, but at a “higher level.”

“If I had done what I wanted at the beginning I’m not sure I would have liked it as much,” she says.

Another, more extreme, example of injecting individuality, despite a limited budget, is a house Mr. Frappier designed for Olivier Cuilleret, 47, a headhunter, and Denise Bernachez, 45, a sales executive, on the shores of Lake Ouareau near Saint-Donat.

To keep the cost at around US$428,000 for the four-bedroom, 260qm  house, Mr. Frappier kept most of the windows and doors at a standard size and made the structure simple enough that any local contractor could easily build it.

What makes it stand out is its ceiling: Mr. Frappier used white pine, shaping it in a curve like the hull of a wooden boat and lowering it to 8 feet as it approached the glass doors to maintain a more affordable, standard height, then letting it soar back up to 12 feet at the centre of the room. “It’s only one gesture but it makes a huge difference,” says Mr. Frappier.

Mr. Frappier’s most well-known house is a 130qm addition, which cost about US$311,000 to build, at a holiday home along Lake Ouareau. Called Chalet La petite soeur, or “little sister,” it was built in 2018 for Benoit Dubord, 48, a lawyer and entrepreneur, who had recently remarried and wanted a house that would look both to the past and the future for his blended family.

To blend the old and the new, Mr. Frappier designed the addition as an exaggerated, modern version of the traditional, rustic Canadian log cottage that was already there. It mimics the pitched roof, but is pointier and clad in sheet metal; it also has wood siding, but it is painted all white. The addition has polished concrete floors and floor-to-ceiling glass in the back, looking out to the lake. A glass bridge with wood floors and ceilings connects the old to the new.

Such individuality can also mean a house can be tricky to sell, which Mr. Dubord is trying to do at the moment. He recently listed the house for $1.56 million. “You need someone who appreciates the contrasts,” says Mr. Dubord.

As Mr. Frappier found, even selling individuality to his own wife was tricky. But he hasn’t given up on his dream hockey puck-like house. He’s just waiting for the appropriate time and place, he says.

He estimates it would have cost about $389,000 more to build because everything would have had to be curved, including the windows, concrete foundation walls, exterior cladding, flat roof and gypsum wall.

Across the street in Saint-Donat, his wife’s parents live in a cozy traditional cottage. On a recent June morning, his mother-in-law, Lyse Lahaie, 72, a retired teacher, joked that she has an idea of when that appropriate time and place might occur.

“One day, I’m sure, when we are gone, Maxime will tear this down and make a modern house,” she says. 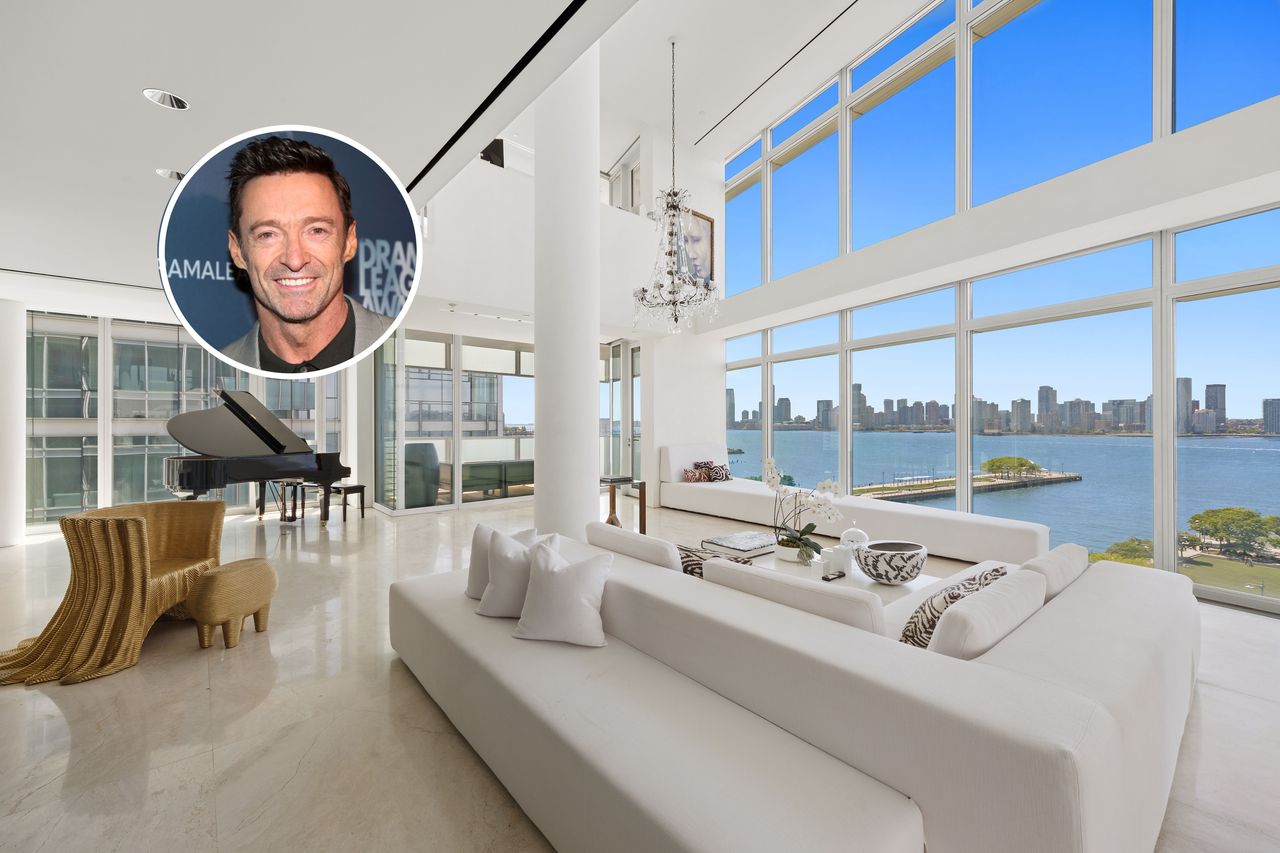 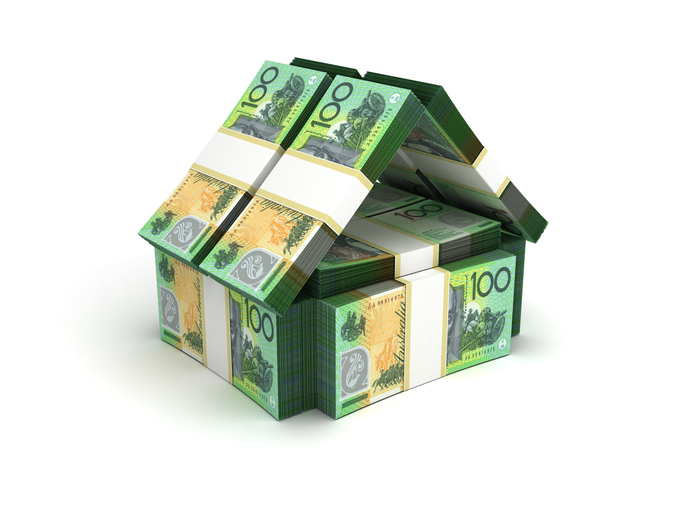