Your Neighbour's Home Renovation Feels Like A Never-Ending Saga

Your Neighbour’s Home Renovation Feels Like A Never-Ending Saga

It started with the bathroom and ended with everything but the kitchen sink. 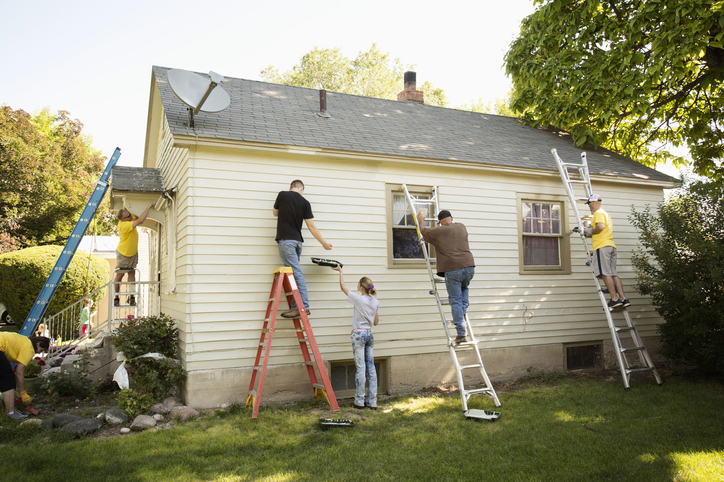 You know that house down the street that’s been undergoing renovations for five years?

You and your neighbours are judging the owners. Don’t deny it. “The house isn’t even that big,” you say. “They could have rebuilt it four times over in the time it’s taken them to do whatever the hell it is they’re doing in there.”

In your sarcasm, you have stumbled upon the truth.

It actually would have been faster and cheaper if they’d just knocked the whole thing down and started from scratch. But they didn’t do that because when they started, all they wanted was a new bathroom.

Let’s take a trip in the Way-Back Machine to the moment when the five-year renovations began. The bathroom is old and dingy and needs a major refresh. Budgets are set, quotes are received, timelines are created.

At this point, one of three things happens.

In our first scenario, construction begins, budgets are exceeded, deadlines are left in the dust. But, eventually, the new bathroom is completed. What a thing of beauty it is! There is joy in the household. Well, not the entire household. Someone has decided that the rest of the house now looks dingy and old compared with the bathroom. Maybe, one spouse suggests, a quick remodel of the living room would be in order so that the superiority of the bathroom does not remain so glaringly evident. Again, budgets are set and exceeded, deadlines made and left in the dust. Finally, a spiffy new living room emerges from the clutter, immediately revealing the dining room to be outdated, unfashionable and, let’s face it, sort of depressing.

Eventually, five or more years later, everything in the house is replaced, including the veranda, the roof, the septic system and one of the spouses.

In our second five-year renovation scenario, we learn early in the bathroom renovation that things are going to be a whole lot more complicated than anyone planned. On day two, the contractors discover that the home’s wiring is so old that there is no point in connecting the spiffy new electrical outlets to it because the first time someone uses a hair dryer while the electric oven is on, it will overload the feeble electrical system and possibly burn down the house.

The electrical wiring, the contractors announce, must be upgraded, house-wide, or else they can’t be held responsible for what happens. This is a job that can be done without tearing out every single wall in the house, but one of the spouses decides that since the walls are all horsehair plaster, they should be replaced as well “while they’re at it.”

The contractors start tearing down walls and guess what those walls aren’t—horsehair plaster. Nope, they are made using once-ubiquitous, currently banned asbestos. This discovery legally requires immediate remediation by a certified asbestos removal team and involves wrapping the house in a giant plastic bag and setting up a self-contained air filtration system that…. oh, screw it. All you really need to know here is that this bathroom renovation has turned the house into a Superfund site that will cost approximately 250 times the cost of the bathroom remodel to clean up. Only then can the electrical system be replaced, or the walls rebuilt, or the bathroom completed.

Scenario two isn’t always asbestos. Sometimes it’s massive termite damage that essentially requires the entire house to be rebuilt. Sometimes it’s foundation subsidence that requires a very complicated repair in which piers are driven into the ground around the house so the foundation can be connected to stop it from sinking like the Titanic. It’s scary. And expensive. Sometimes it’s worse. You get the picture.

In any case, fast-forward five years. The owners, now impoverished, finally get their finished bathroom. They plug in the hairdryer while the oven is running. It blows the circuit breaker.

Scenario three involves the simple bathroom remodel and nothing more. That’s all the owners want. That’s all they can afford. They set a budget and build in a 30% budget allowance and a 50% timeline overrun. They interview multiple contractors until they find The One. The One requires a 50% deposit up front. Although the owners are doing everything right so far, they forget two crucial things—always check references and never pay a contractor 50% upfront.

The contractor gets done ripping out the appliances, fixtures and walls in the old bathroom and then vanishes with the deposit. For the first month, he pretends he’s sick. For the second through sixth month, he assures them he’s coming tomorrow. For months six through current month, he’s just gone. Meanwhile, the owners are trying to work around the giant hole in the middle of their house where the bathroom used to be. Finally, at month eight, they start looking for another contractor to complete the work but their budget, now just 50% of its original size, causes at least two of the contractors to bust out laughing. The owners are exceedingly dejected. The home remains a work site until they are able to scrape together the remaining funds, which takes them four more years.

The next time you see that house down the street that has been under renovation for the past five years, don’t scorn the owners, as is your way. Instead, bring them a casserole and sit quietly while they tell you the story of their five-year hell project. Bring some tissues. They’ll probably cry.