An alluring, multi-property luxury retreat in one of Sydney’s most sought after areas. 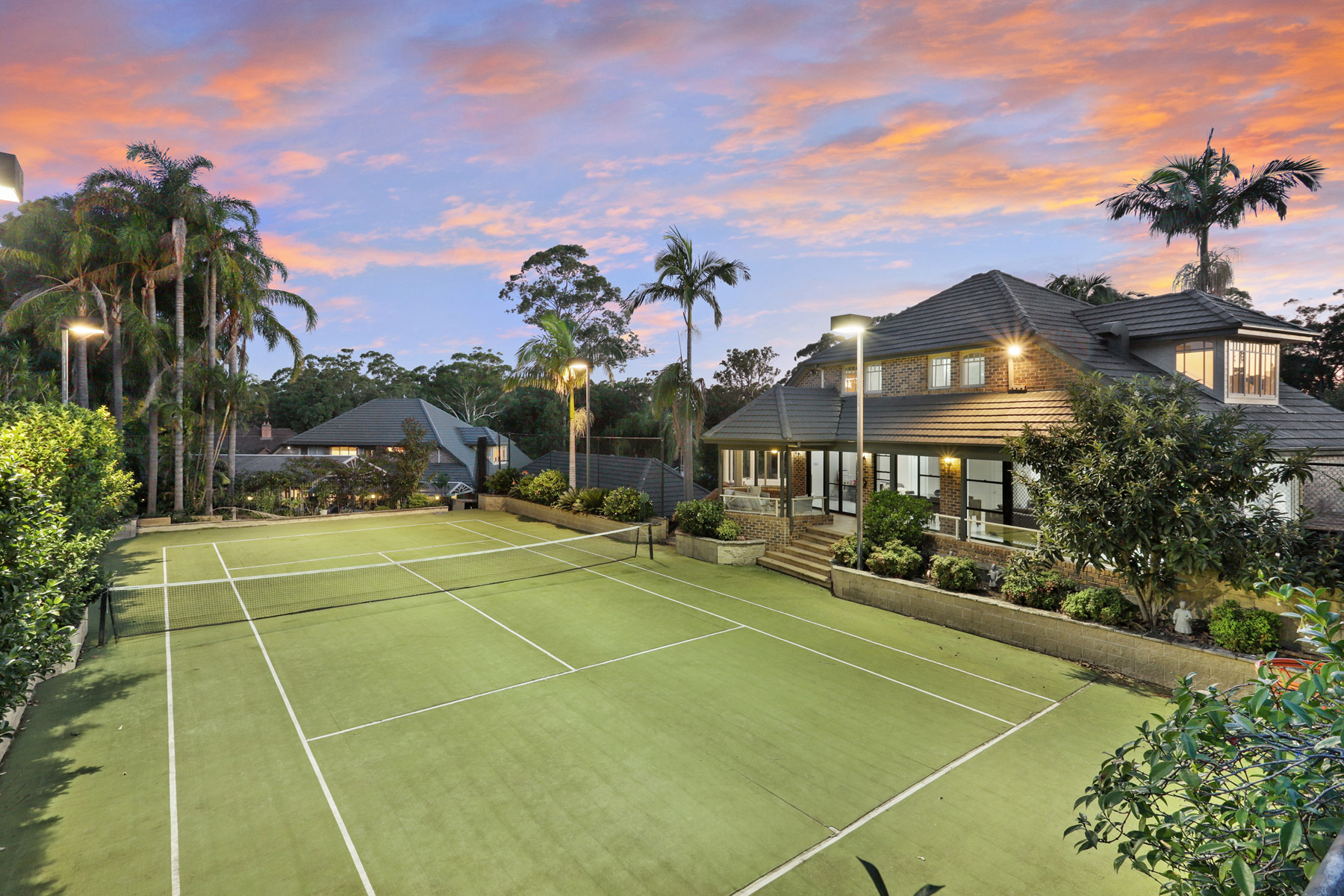 This multi-property estate sits in one of Sydney’s Hills District’s most sought after areas across an expansive 3504sqm block.

With resort-like luxury features throughout, the home also boasts an array of enviable amenities such as championship sized tennis court (with floodlights for an after dark hit), covered in-ground pool, sauna, spa and wine cellar.

The main residence holds four generous bedrooms across the upper level, including the master suite complete with large dressing room, built in daybed and opulent full-size marble bathroom and spa – complementing the other bathrooms.

Downstairs sees a main living space seamlessly linking to the outdoors, as well as a bespoke kitchen finished with marble and stone benchtops, alongside a handmade Italian cooktop and oven.

The alfresco dining area overlooks the tennis court and manicured grounds that include waterfall feature, bridge and koi pond, making for a relaxing area to unwind and also entertain.

Further luxuries include a dedicated theatre room with bar.

The second residence boasts a lift connecting the ground floor with the upper level featuring two king-size bedrooms that share well-appointed bathroom ensuite, along with a further bedroom. Three bathrooms fill the second home, featuring floor to ceiling tiling while parquet floors in the foyer transition to open plan living connected to an alfresco entertaining area that includes sauna, jacuzzi and wine cellar.

Related Stories
Even In A Tight Market, Buyers Can Still Land Perks In New Developments

Private club memberships and luxury cars are some of freebies on the table. 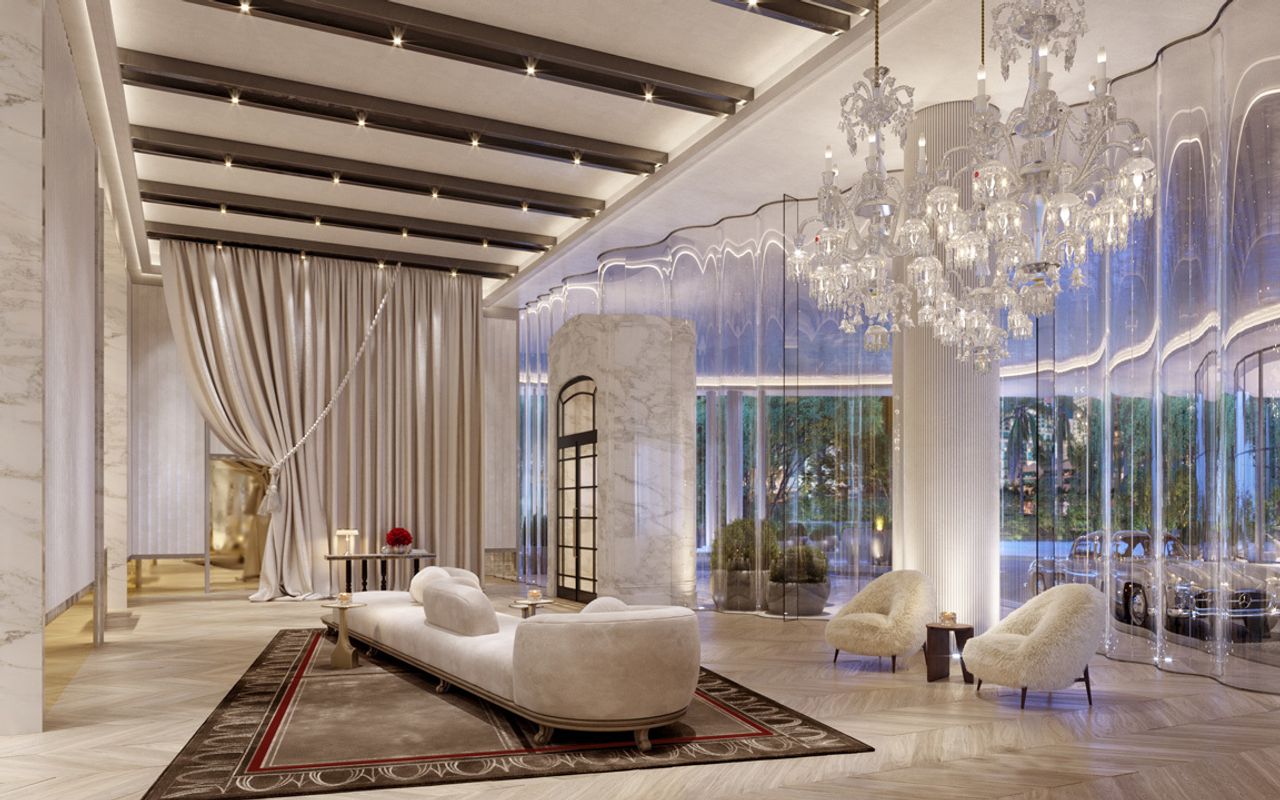 When Ryan Wolitzer was looking to buy an apartment in Miami Beach late last year, several beachfront properties caught his eye. All were two-bedroom homes in high-end buildings with amenities aplenty and featured glass walls, high ceilings and an abundance of natural light. But only The Continuum, in the city’s South of Fifth district, came with a gift: a membership to Residence Yacht Club, a private club that offers excursions on luxury yachts ranging from a day in south Florida to a month around the Caribbean. Residents receive heavily discounted charters on upscale boats that have premier finishes and are stocked with top shelf spirits and wine. Mr. Wolitzer, 25, who works for a sports agency, was sold.

“The access to high-end yachts swayed my decision to buy at The Continuum and is an incentive that I take full advantage of,” Mr. Wolitzer said. “It’s huge, especially in my business when I am dealing with high-profile sports players, to be able to give them access to these incredible boats where they experience great service. I know that they’ll be well taken care of.”

Freebies and perks for homeowners such as a private club membership are a mainstay in the world of luxury real estate and intended to entice prospective buyers to sign on the dotted line.

According to Jonathan Miller, the president and chief executive of the real estate appraisal and consulting firm Miller Samuel, they’re primarily a domestic phenomenon.

In the U.S. residential real estate market, gifts are offered by both developers who want to move apartments in their swanky buildings and individuals selling their homes. They range from modest to over-the-top, Mr. Miller said, and are more prevalent when the market is soft.

“When sales lag, freebies increase in a bid to incentivize buyers,” he said. “These days, sales are slowing, and inventory is rising after two years of being the opposite, which suggests that we may see more of them going forward.”

Many of these extras are especially present in South Florida, Mr. Miller said, where the market is normalizing after the unprecedented boom it saw during the pandemic. “The frenzy in South Florida was intense compared with the rest of the country because it became a place where people wanted to live full time,” he said. “Now that the numbers are inching toward pre-pandemic levels, freebies could push wavering buyers over the finish line.”

Kelly Killoren Bensimon, a real estate salesperson for Douglas Elliman in Miami and New York, said that the gifts that she has encountered in her business include everything from yacht access and use of a summer house to magnums of pricey wine. “One person I know of who was selling a US$5 million house in the Hamptons even threw in a free Mercedes 280SL,” she said. “They didn’t want to lower the price but were happy to sweeten the deal.”

A car, an Aston Martin to be exact, is also a lure at Aston Martin Residences in Miami’s Biscayne Bay. Buyers who bought  one of the building’s 01 line apartments—a collection of 47 ocean-facing residences ranging in size from 325 to 362sqm and US$8.3 million to US$9 million in price—had their choice of the DBX Miami Riverwalk Special Edition or the DB11 Miami Riverwalk Special Edition. The DBX is Aston Martin’s first SUV and retails for around US$200,000. It may have helped propel sales given that all the apartments are sold out.

The US$59 million triplex penthouse, meanwhile, is still up for grabs, and the buyer will receive a US$3.2 million Aston Martin Vulcan track-only sports car, one of only 24 ever made.

“We want to give homeowners the chance to live the full Aston Martin lifestyle, and owning a beautiful Aston Martin is definitely a highlight of that,” said Alejandro Aljanti, the chief marketing officer for G&G Business Developments, the building’s developer.  “We wanted to include the cars as part of the package for our more exclusive units.”

The US$800,000 furniture budget for buyers of the North Tower condominiums at The Estates at Acqualina in Sunny Isles, Florida, is another recent head-turning perk. The 94 residences sold out last year, according to president of sales Michael Goldstein, and had a starting price of US$6.3 million. “You can pick the furniture ahead of time, and when buyers move in later this year, all they’ll need is a toothbrush,” he said.

Then there’s the US$2 million art collection that was included in the sale of the penthouse residence at the Four Seasons Residences in Miami’s Brickell neighbourhood. The property recently sold for $15.9 million and spans 817sqm feet. Designed by the renowned firm ODP Architects, it features contemporary paintings and sculpture pieces from notable names such as the American conceptual artist Bill Beckley and the sculptor Tom Brewitz.

But it’s hard to top the millions of dollars of extras that were attached to the asking price in 2019 of the US$85 million 1393sqm  duplex at the Atelier, in Manhattan’s Hell’s Kitchen neighbourhood. The list included two Rolls-Royce Phantoms, a Lamborghini Aventador, a US$1 million yacht with five years of docking fees, a summer stay at a Hamptons mansion, weekly dinners for two at lavish French restaurant Daniel and a live-in butler and private chef for a year. And the most outrageous of all: a flight for two to space.

It turned out that the so-called duplex was actually a collection of several apartments and a listing that went unsold. It did, however, generate plenty of buzz among the press and in real estate circles and was a marketing success, according to Mr. Miller.

“A listing like this that almost seems unbelievable with all the gifts will get plenty of eyeballs but is unlikely to push sales,” he said. “Empirically, it’s not an effective tactic.”

On the other hand, Mr. Miller said that more reasonable but still generous freebies, such as the membership to a yacht club, have the potential to push undecided buyers to go for the sale. “A nice but not too lavish gift won’t be the singular thing toward their decision but can be a big factor,” he said. “It’s a feel-good incentive that buyers think they’re getting without an extra cost.”

Examples of these bonuses include a membership to the 1 Hotel South Beach private beach club that buyers receive with the purchase of a residence at Baccarat Residences Brickell, or the one-year membership to the Grand Bay Beach Club in Key Biscayne for those who spring for a home at Casa Bella Residences by B&B Italia, located in downtown Miami and a residential project from the namesake renowned Italian furniture brand. The price of a membership at the Grand Bay Beach Club is usually a US$19,500 initiation fee and US$415 in monthly dues.

Still enticing but less expensive perks include the two-hour cruise around New York on a wooden Hemmingway boat, valued at US$1,900, for buyers at Quay Tower, at Brooklyn Bridge Park in New York City. The building’s developer, Robert Levine, said that he started offering the boat trip in July to help sell the remaining units. “We’re close to 70% sold, but, of course, I want everything to go,” he said.

There’s also the US$1,635 Avalon throw blanket from Hermes for those who close on a unit at Ten30 South Beach, a 33-unit boutique condominium; in Manhattan’s Financial District, a custom piece of art from the acclaimed artist James Perkins is gifted to buyers at Jolie, a 42-story building on Greenwich Street. Perkins said the value of the piece depends on the home purchase price, but the minimum is US$4,000. “The higher end homes get a more sizable work,” he said.

When gifts are part of a total real estate package, the sale can become emotional and personal, according to Chad Carroll, a real estate agent with Compass in South Florida and the founder of The Carroll Group. “If the freebie appeals to the buyer, the transaction takes on a different dynamic,” he said. “A gift becomes the kicker that they love the idea of having.”

Speaking from his own experience, Mr. Carroll said that sellers can also have an emotional connection to the exchange. “I was selling my house in Golden Isles last year for US$5.4 million and included my jet ski and paddle boards,” he said. “The buyers were a family with young kids and absolutely loved the water toys.” Mr. Carroll could have held out for a higher bidder, he said, but decided to accept their offer. “I liked them and wanted them to create the same happy memories in the home that I did,” he said.

The family moved in a few months later.